Most of us don’t think about Water Valley’s infrastructure – the public works that serve as the backbone of our city – until something goes wrong: a problem with the water, power, bridges, streets or sidewalks. Then we just want it fixed quickly so we can go back to not having to think about it. But Water Valley, like the rest of America, is wrestling with the problem of aging infrastructure.

In 2005 the American Society of Civil Engineers judged the country on 15 infrastructure categories ranging from aviation, drinking water, and hazardous waste to rail, schools, and security.

The resulting “2005 Report Card for America’s Infrastruc-ture” awards the U.S. an overall grade of “D”:  a step below the cumulative D+ received in 2001, the last time the ASCE issued the report. The document also offers an analysis of each of the 15 areas.

Dams: There are 46 state-determined deficient dams in Mississippi. There are 307 high hazard dams. A high hazard dam is defined as a dam whose failure would cause a loss of life and significant property damage. The rehabilitation cost for Mississippi’s most critical dams is estimated at $82.5 million.

Many of the issues facing Mississippi are also facing Water Valley. We recently celebrated our city’s sesquicentennial and some of our infrastructure dates back to the 19th century.

There was a recently commissioned report on “the invisible infrastructure” – the pipes buried underneath cities and towns that deliver clean water and carry away any waste water. Sewerage infrastructure alone in the nation’s cities is a half-trillion-dollar problem, the report says, and communities are trapped in a Catch-22: Federal grants for communities to improve their wastewater treatment infrastructure has dried to a trickle over recent decades. Yet communities are compelled by the Clean Water Act, signed into law in 1972, to treat and purify wastewater.

There is no easy answer to this question. The needed repairs and replacement will not be cheap.  We are a generation that inherited an infrastructure that was built by most of our grandparents and great-grandparents.  We need to look at it as an investment to pass on to the next generation.

Med-Mart at 211 North Main Street will be celebrating their 7th anniversary in Water Valley on June 11. Shelia Williard invites everyone to an open house beginning at 9:30. 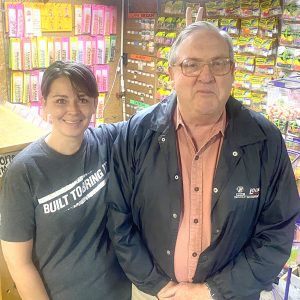