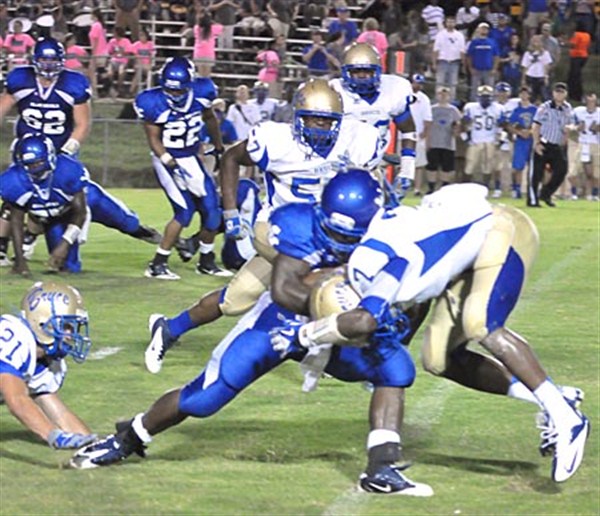 After being out of action with an injury, senior Jeoffrey Gordon was back in the game last Friday. – Photo by Mark Anthony


WATER VALLEY – It was a tale of two halves, with a sprinkle of late game heroics, as Water Valley (4-0 overall) defeated Bruce (3-1 overall) 17-16 last Friday night.
The Trojans had Water Valley on the ropes for much of the first half, but it was the Blue Devils who dominated from halftime on, setting up a 42 yard game winning field goal from Alex Robles with 36 seconds remaining in the fourth quarter.
“It could’ve been bad at halftime, but we fought hard and scrapped to keep it close.  Maybe the speed of the game got us out of whack, I don’t know, we just didn’t execute in the first half.  Bruce is a good football team, and you have to give them credit for the way we played in the first half,” said Water Valley Head Coach Brad Embry.  “But we’ve got a great group of assistant coaches that work their tails off, and we made some good adjustments.”
Bruce opened the scoring on the night with a six play, 54 yard drive, capped off by an 11 yard touchdown pass from Davis Brown to Donta Armstrong with 6:44 remaining in the first quarter.
Water Valley saw their deficit increase at the start of the second quarter after a turnover on downs.  Again, Davis found Rashad Turner streaking down the sideline for a 55 yard touchdown reception.  After a missed extra point, Bruce’s lead was 13-0 with 11:51 remaining in the second quarter.
The Trojans missed several chances to put the game out of reach in the dying moments of the first half.  Davis was picked off by K.J. Lee and L.J. Hawkins on back to back possessions, and a Turner interception return for a touchdown was called back for a block in the back with 16 seconds remaining before halftime.
“We just had to keep it hype, keep it going, keep it pushing.  We weren’t down much, we just had to get hot in the second half,” said Water Valley linebacker Quinterrio Bailey.
Water Valley respon-ded on their first drive of the second half, as Gordon, E.J. Bounds, and Brandon Bounds led the Blue Devils down the field on eleven consecutive running plays.
E.J. Bounds capped off the drive with a 29 yard touchdown pass to T.T. Person with 6:08 remaining in the third period, bringing the score to 13-7.              Armstrong had a chance at an interception on the play for the Trojans, but Bounds’ pass went through the hands of the Bruce defensive back.
“That was about the third read on that play, so that was a great job by E.J. coming all the way back to that,” said Embry.
A B.J. White fumble recovery on the first play of Bruce’s ensuing possession gave Water Valley a short field, allowing them to retake the lead.  Brandon Bounds rushed in from two yards out seven plays later to give the Blue Devils a 14-13 lead with 3:02 remaining in the third quarter.
Bruce would retake the lead on their next drive, as Shaq Bush converted a 32 yard field goal attempt with 10:00 left in the game, giving the Trojans a 16-14 lead.
Water Valley drove deep into Trojan territory on their next possession, but Brandon Bounds slipped on fourth and six at the Bruce 35 yard line, turning the ball over on downs with just over seven minutes remaining in the game.
“Brandon is a good football player, he’s such a good kid and mild mannered, but on the football field he gets so geeked up and he’s fighting and scrapping out there.  (On the fourth down play) We slipped one on them, that was a big gainer, but Brandon just slipped,” said Embry.
Bruce failed to run the clock out on their next possession, going three and out.  A big punt return by Cole Camp set up the Blue Devils at the Trojan 49 yard line for what would be their game winning drive.
A mixture of E.J. and Brandon Bounds on the ground moved the ball to the Bruce 29 yard line for a 3rd and 13 play.  Embry, instead of attempting to gain the first down through the air, chose to stick with E.J. Bounds on the ground for four yards, moving the ball into field goal range for Robles.
“We were playing for the field goal the whole way.  I thought we had a better chance of spreading them out, running the ball, and getting five yards than (throwing it).  (Robles) can hit one from the 30, but his confidence goes way up when you get to that 25,” said Embry.
Robles repaid Embry’s confidence in full, as the sophomore kicker bounced his 42 yard field goal off the crossbar and over to give the Blue Devils a 17-16 lead with 36 seconds remaining in the game.
“When I kicked the ball, I didn’t look up.  I just closed my eyes and started praying.  I didn’t see it hit the crossbar, I heard it, and then the officials put their hands up. I just started running, I didn’t know what to think,” said Robles.  “I couldn’t have done it without my teammates though, they had to get the yardage, so I want to thank them and I’m glad my coaches trust me there.”
Brown’s final hail mary attempts were batted down, and for the second consecutive year, the Blue Devils topped the Trojans in a one point thriller.
“I thought we would play better in the second half, our guys aren’t quitting any time. They were wearing down in the second half, and we saw that,” said Embry.  “We’re a veteran team, we’ve been down, there was no panic in the locker room.  This is big, you can stick it in your back pocket, especially for some of the younger kids who haven’t been behind in a big game.”

Versus Charleston
Water Valley travels to Charleston (3-1 overall) this Friday for matchup with the defending 3A champions.  The Tigers handed Water Valley a 39-3 loss last season, the worst in Embry’s tenure.
“Last year was a bad job by me, we were beat up and we were young, and Charleston was really really good and that’s not a good mixture,” said Embry.  “It’s a challenge, but its a non-region football game.  We’re going to go over there and play just like we did tonight and see what happens.”
For Bailey and his Blue Devil teammates, this year’s meeting with Charleston is a chance at redemption.  The senior linebacker insists that his team goes into Friday night’s game with enough confidence to pull off the upset.
“I think we can handle them.  We know they can’t run it against us, if our secondary gets out like they did tonight, we can win,” said Bailey.