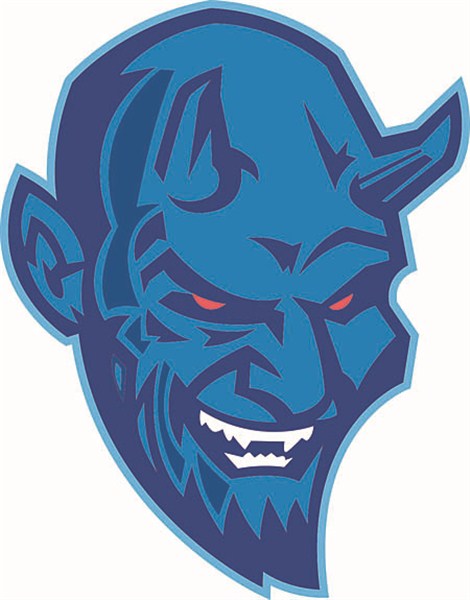 
CHARLESTON –  Despite taking the defending 3A champions to the wire last Friday night, Water Valley Head Coach Brad Embry insists that his Blue Devils are at the point where moral victories are not good enough.
In a back and forth affair with the Charleston Tigers (4-1 overall), Water Valley (4-1 overall) came up just short, falling 35-21 for their first loss of the season.  The Tigers defeated Water Valley 39-3 last season, the worst loss in Embry’s tenure.
“We know we have a chance to be a good team this year, we don’t need moral victories we need victories on the scoreboard,” said Embry.  “I hope (the players) now know how good we can be if we eliminate some mistakes.”
After Charleston jumped out to an early 7-0 with 7:40 remaining in the first quarter, junior quarterback E.J. Bounds led the Blue Devils to a response, capping off the drive with a five yard touchdown pass to fullback Jarard Williams.
The Tigers regained the lead midway through the second quarter as Jalen Haywood tossed his second touchdown of the night from eight yards out.  A failed extra point kept the score at 13-7.  On the ensuing drive, Bounds continued his hot start with a seven yard touchdown pass to tight end Alden Burns, giving Water Valley a 14-13 lead before the half.
Charleston regained the momentum with a one yard touchdown pass from Haywood on the last play of the first half.  A successful two point conversion pushed the Tiger lead to 21-14 going into halftime.  Haywood finished the night with 85 yards thru the air, completing seven of his 15 pass attempts.
“Our offensive players and staff did an excellent job and played well enough for us to win this game. It is up to me to make sure that the defense holds up our part of the team effort and that is my focus going forward,” said Water Valley Defensive Coordinator Richard Russo.
After Haywood put the Tigers in front in the first half, running back Ge’vonte Jones picked up where his senior quarterback left off.  A Jones touchdown run and ensuing two point conversion put Charleston up 29-14 midway through the third quarter, and the Tigers never looked back.
Bounds limped off the field shortly after Jones’ touchdown run and missed the majority of the second half, putting Water Valley’s upset bid in serious jeopardy.  After Bounds return, senior running back gave the Blue Devils a glimmer of hope with a one yard touchdown run after a Cole Camp punt return set Water Valley up at the Charleston 18 yard line.
However, 29-21 late in the fourth quarter was the closest the Blue Devils would get, as Jones again rushed in with 39 seconds remaining in the game to give Charleston the 35-21 victory.  Jones finished the night with 149 yards on just nine carries.  As a team, Charleston totaled 307 yards on the ground on 39 carries.  35 points is the most given up by a Blue Devil defense since their meeting with the Tigers last season.
“I am proud of the effort our kids played with tonight. However, against teams of this magnitude, such as the defending state champions, effort isn’t enough,” said Russo.  “You have to play with technique, fundamentals, and a sense or urgency for 48 minutes. We didn’t do that tonight and Charleston made us pay for it.”
Water Valley will now look to bounce back against J.Z. George (2-3 overall) Friday night in their last game before division play. The Jaguars have bounced back from an 0-2 start, winning two of their last three, and averaging 30 points per game during that stretch.  J.Z. George has already eclipsed their win total from 2011 after going 1-10 under former coach Chris McRae.
Water Valley defeated J.Z. George 37-0 last season, and Embry will look for a response on Friday night as his Blue Devils push for back to back division titles.
“We have several guys that we need to get well, and it is very important that they get back out there and we can get back to 100% as a team,” said Embry.  “I think we have a chance (to win division and state championships), and that is all we can ask for. The rest is on us to prepare and execute from week to week.”