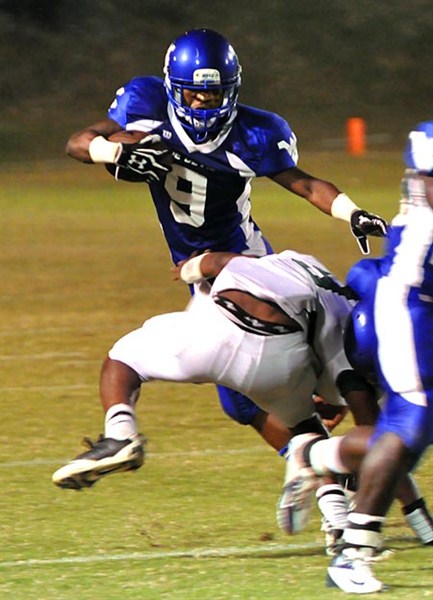 
WATER VALLEY –  A stable of running backs and a trio of quarterbacks got Water Valley’s division campaign off to the perfect start last Friday night with a 45-0 victory over the Mooreville Troopers.
Four different Blue Devils (6-1 overall, 1-0 division) scored rushing touchdowns, while the Water Valley defense stifled Mooreville’s (3-4 overall, 0-1 division) read option offense, securing Head Coach Brad Embry’s fourth straight win in division openers.
“It was a must win, they’re young and we knew that, but they’re good enough to where you had to get on them quick and not let them have any hope,” said Embry.
Back up quarterback Cole Camp got the Blue Devils on the scoreboard midway through the first quarter with a two yard touchdown run, giving Water Valley an early 7-0 lead.  Camp, along with K.J. Lee and Jonathan Kent split time, filling in for the injured E.J. Bounds.  Bounds has not played since the Blue Devils’ loss at Charleston.
Camp’s night took a horrific turn on a punt return just minutes later, as the junior utility player suffered a broken tibia and fibula.  The standout football and baseball player was taken off the field in an ambulance and now faces a lengthy spell on the sidelines.  Camp had surgery on the injury Saturday morning.
“We just had to do what we do best around here and rally and be a family.  That’s what we preach, and if we preach it, we might as well live it,” said Defensive Coordinator Richard Russo.  “(Camp) is absolutely one of the best young men on this 72-man roster and my heart just aches for him.”
Sophomore running back Brandon Bounds extended the Blue Devil lead four plays after the Camp injury with a 33 yard touchdown run with 2:51 remaining in the first quarter.  Alex Robles converted the extra point to bring Water Valley’s lead to 14-0.
After a Mooreville punt on the ensuing possession, Water Valley’s ground game went to work once again.  Four different Blue Devils recorded carries on a 14 play, 93 yard touchdown drive.  Lee capped off the drive with a  33 yard touchdown run right up the middle of the Mooreville defense to give Water Valley a 21-0 lead with 5:10 remaining before halftime.
“They didn’t know if I was going to hand it off, or keep it, or run it,” said Lee.  “The coaches tell me to read my keys and don’t try to do everything, and that’s what I did.”
Lee finished the night with 44 yards on four carries and one completion for 37 yards.
After a Robles 31 yard field goal gave the Blue Devils a 24-0 lead, the Blue Devils blocked a Mooreville field goal attempt as time expired in the first half.  After some brief confusion, a frantic Blue Devil sideline encouraged Lee to return the blocked attempt and the junior did just that.  The 75 yard touchdown return put Water Valley up 31-0 heading into halftime.
“There were one or two guys standing there and I looked on the sideline and saw Coach Russo and Coach Mix telling me to pick it up and score,” said Lee.  “I knew I could pick the ball up, Coach Russo practices that every Thursday.”
A laughing Embry after the game credited Lee’s touchdown to “players making plays.”
Kent extended the Blue Devils lead with 7:12 left in the third quarter with a  39 yard touchdown pass to L.J. Hawkins in the corner of the end zone.  Robles’ extra point pushed the Blue Devils out to a 38-0 lead.
“We worked hard for a couple of weeks trying to get Camp, Lee, and Kent ready.  Considering the split reps, they executed very well,” said Embry.
After a Mooreville three and out, the Blue Devils capped off the scoring for the night with a 31 yard Jarard Williams touchdown run, brining the score to 45-0 with 41 seconds remaining in the third quarter.
“I tell you what, we got guys going down left and right on the offensive line, but Coach Faust is to be commended for clicking like that,” said Embry.
Water Valley finished the night with 299 yards on 45 carries and four rushing touchdowns.
Despite dominating on both sides of the ball, Embry remained visibly shaken while discussing Camp’s injury, acknowledging that the Blue Devils’ division opening win was very much bittersweet.
“I told the guys after the game that life throws you some tough loops, sometimes you don’t understand, but it happens.  What happened tonight was tough,” said Embry.
Water Valley will now attempt to get healthy and refocused for Friday night’s meeting with the South Pontotoc Cougars (1-6 overall, 0-1 division).  Bounds remains questionable, while senior offensive tackle Taylor Edwards and senior running back Jeoffrey Gordon are also nursing injuries.
South Pontotoc’s lone win of the season came against Ethel.  The Cougars opened their division campaign with a 32-29 loss to Nettleton.
The Blue Devils crushed South Pontotoc 49-7 last season, and have not lost to South Pontotoc in Embry’s tenure.