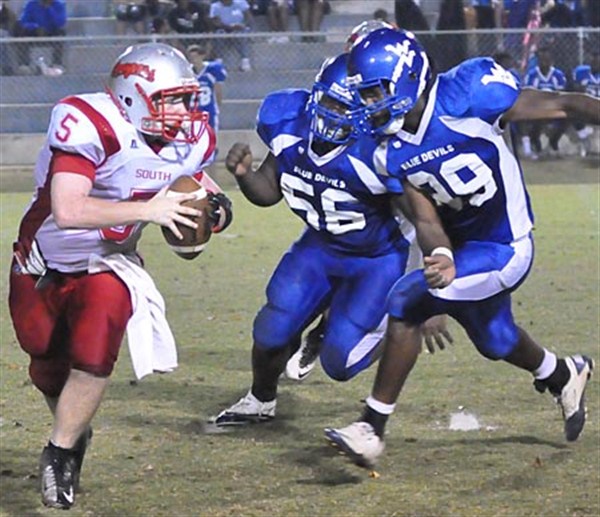 James Harris and B.J. White close in on the quarterback during Friday night’s contest against South Pontotoc. Their pressure was part of a relentless attack that helped seal the 47-20 win for the Blue Devils. Photo by Mark Anthony


WATER VALLEY – Water Valley’s strong start to division play continued Friday night with a 47-20 victory over the South Pontotoc Cougars.  The Blue Devils (7-1 overall, 2-0 division) jumped out to a 44-13 halftime behind a strong rushing attack and three touchdown passes from sophomore quarterback Jonathan Kent.
Water Valley opened the scoring on the night with a 34 yard Jarard Williams touchdown run, giving Water Valley a 7-0 lead with 7:47 remaining in the first quarter.
South Pontotoc answered Water Valley’s early score with a 39 yard touchdown reception from Evan Kidd.  A missed extra point preserved the Blue Devils lead at 7-6.
Kent continued his career night on the next two possessions, finding T.T. Person and L.J. Hawkins on consecutive pass plays for touchdowns.  A turnover on a South Pontotoc kickoff return allowed the Blue Devils to extend their lead from 7-6 to 21-6 in 12 seconds.
“Our receivers in general (are as good as we’ve had). Person and Hawkins are starters, and they’ve grown up (in offenses) that throw the ball, so they’re getting better,” said Embry.
Sophomore Alex Robles connected on a 23 yard field goal with 2:36 remaining in the first quarter to give Water Valley a 24-6 lead.
A long Person punt return set up Water Valley’s next scoring drive, as K.J. Lee rushed in from nine yards out to put the Blue Devils ahead 30-6 with 11:43 remaining before halftime.
South Pontotoc’s miserable first half continued on their next possession, as a high snap on a punt was recovered by Water Valley’s Gary Bolden inside the Cougar 10 yard line.  Williams powered his way in from four yards out for his second touchdown of the night, extending the Blue Devil lead to 37-6 with just over six minutes remaining in the half.
Freshman Wesley Ross found Kidd for a 67 yard touchdown reception on the ensuing possession for South Pontotoc, cutting the Cougar deficit t to 37-13.  Kidd’s two receptions on the night went 106 yards and two touchdowns.
“(Kidd) is a really good receiver, and they found him a couple of times.  That’s on us for not being in the right spot,” said Embry.
Kent connected with Hawkins again just before the half, this time for a 25 yard touchdown reception with just over one minute before halftime.  A Robles point after attempt pushed the Water Valley lead to 44-13.
Water Valley struck first in the second half, as a 25 yard field goal capped off their scoring on the night at 47-13 with 9:16 remaining in the third quarter.
South Pontotoc answered on their ensuing drive as Ross connected with Clay Hood for a 29 yard touchdown reception, bringing the score to its final margin of 47-20 with just over four minutes remaining in the third quarter.
A defense made up of reserves was pulled midway through the second half, as Embry decided to return to his starters in attempt to subdue any potential South Pontotoc rally.
“We played crisp and then we took the starters out.  That was a great learning tool for those younger guys,” said Embry.  “During pre game meal, I called four or five freshmen over and asked them their assignments in certain situations and they weren’t ready to play.  They need to be ready to play at all times.”
Water Valley returns to division play Friday night with a trip to Nettleton (1-7 overall, 1-1 division).  The Tigers, who were expected to be a dark horse contender in Region 2-3A have had a nightmare season, with their only win coming against South Pontotoc.
“We’ll be ready.  Our guys are tough and resilient.  It’ll be a little different for us (going on the road), but we’re going to have a good week of practice.  I expect us to be better next week,” said Embry.
Nettleton has struggled mightily on defense, as the Tigers have given up 50 or more points on four occasions this season, three of which came at home.  On the flip side, the Tiger offense has been absent of big plays nearly all year.  Nettleton has been held to 14 points or less five times.
Despite being heavy favorites, Embry doesn’t expect his team to overlook the Tigers with a showdown with Aberdeen looming.
“We focus on getting better every week.  Not only are we preparing for Nettleton, but we’re trying to do everything better ourselves, whether that be running gassers better or running drills better,” said Embry.
Water Valley has not dropped a division game on the road since losing at Aberdeen in 2010.