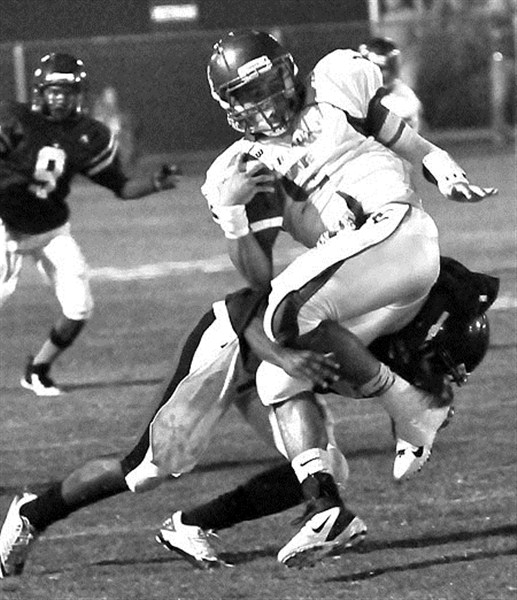 Junior quarterback E.J. Bounds was back in action Friday after being sidelined with an injury since the Sept. 14 game against Charleston. He completed six of nine passes against Nettleton. – Photo by Jordan Hodge


NETTLETON – Although Nettleton struck first, Water Valley racked up the points again to pick up a division win last Friday, 33-13.
Nettleton’s first touchdown came mid-way through the first quarter to jump ahead seven points.
It would be early in the second quarter before the Blue Devils (8-1 overall, 3-0 division) would find the end zone on a seven-yard run by running back Jeoffrey Gordon. A missed P.A.T. by Alex Robles put the Blue Devils behind, 7 – 6.
The next Blue Devil score would come on a one yard run by junior quarterback E.J.Bounds, who saw playing time after being out for almost a month after sustaining an injury in the Charleston game. Robles connected on the P.A.T. to put the Blue Devils ahead 13-7.
With less than a minute remaining in the half, Water Valley would score again on a 38-yard touchdown reception to L.J. Hawkins to increase the lead 20-7 with the successful P.A.T.
Nettleton narrowed the score to 20-13 with their second and final touchdown of the contest, a 55-yard touchdown pass mid-way through the  third quarter.
Water Valley would find the endzone two more times in the fourth quarter with a one-yard run by Bounds and a two-yard touchdown run by Gordon to record the win.

The Leaders
Bounds recorded 140 yards passing and one touchdown, as well as two rushing touchdowns.
Gordon had 206 rushing yards on 24 carries and two touchdowns.
L.J. Hawkins had 79 yards on 3 catches and a touchdown.
Linebacker Quinterrio Bailey had a team high 12 tackles.
With the win, Water Valley will face their toughest division rival Friday when the team travels  to Aberdeen (7-2 overall, 3-1 division) for a chance to clinch the division.