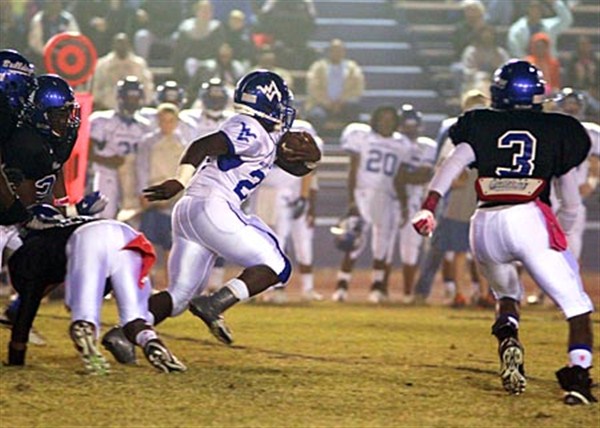 
ABERDEEN –  In a winner take all Region 2-3A showdown, the Water Valley Blue Devils (8-2 overall, 3-1 division) suffered a heart breaking defeat, surrendering their division championship to the Aberdeen Bulldogs (8-2 overall, 4-0 division).
Offensive struggles plagued the Blue Devils for a large part of the night, while a desperation fourth down heave secured the 20-13 victory for Aberdeen late in the fourth quarter.
“I told them after the game that we didn’t play well enough to win, and we didn’t coach well enough to win,” said Water Valley Head Coach Brad Embry.  “Its supposed to hurt when you lose a game like this, but we’ve got a tough bunch of kids, and I’m sure they’ll bounce back.”
Despite giving up over 300 yards of total offense on the night, the Water Valley defense controlled the majority of the game, recording five sacks, an interception, and a fumble recovery.  However, it was the big plays that let down the Blue Devils.
“To hold a high-octane offense like Aberdeen to under three touchdowns is a feat,” said Water Valley Defensive Coordinator Rich-ard Russo.  “However, in these big games like Charleston and Aberdeen, we have got to stop being close and start finishing them.”
Water Valley opened the scoring on the night in authoritative fashion with a six play, 73-yard touchdown drive.  Sophomore running back Brandon Bounds capped off the drive with a 33 yard touchdown run to give the Blue Devils a 7-0 lead with 6:10 remaining in the first half.  Water Valley averaged 12.2 yards per carry on the scoring drive.
Following Water Valley’s turnover on downs at the Aberdeen 27 yard line, the Bulldogs finally found an offensive spark.  Sophomore quarterback Josh Williams found senior wide receiver Aaron McMillian streaking down the sideline for a 70 yard touchdown just three plays after the failed Water Valley fourth down attempt.  The extra point was no good for Aberdeen, as Water Valley held on to a 7-6 lead with 9:51 remaining in the first half.
Aberdeen took their first lead of the night with a 13 play, 74 yard touchdown drive just before the half.  A controversial pass interference call on Water Valley safety Devin Fleming set up Aberdeen inside the ten yard line, and on the ensuing play, Justin Lucas sprinted into the end zone for a Bulldog touchdown.  Aberdeen failed on a two point attempt, keeping the score at 12-7 with :32 left before halftime.
The third quarter was largely dominated by both defenses, both billed as two of 3A’s best heading into the division decider. Lucas led the Bulldogs with 17 total tackles, while Water Valley’s Quinterrio Bailey had a game high 22 total tackles.
Water Valley regained the lead and the momentum with just under nine minutes remaining in the game as Brandon Bounds again found the end zone, this time from four yards.  A failed two point conversion attempt kept the score at 13-12 in favor of the Blue Devils.
The Blue Devils’ failed to keep the momentum as Aberdeen set off on their game winning drive.  Junior running back Chico Harr-ison, coupled with the scrambling of Williams, willed the Bulldogs down the field on an eight play, 59 yard touchdown drive.  Williams found junior wide receiver Sammie Burroughs on a fourth and 12 from the Water Valley 27 yard line for the improbable touchdown.  A successful two point conversion gave Aberdeen a 20-13 lead with 5:08 remaining in the game.
“We had two or three guys there, we couldn’t have covered it any better, and there guy just went up and made a play,” said Embry.
Williams finished the night with 136 yards passing on just seven completions, while the sophomore scrambled for 74 yards on 17 carries.
Water Valley had one final opportunity to find a game tying touchdown, but the Blue Devils drive ended with a E.J. Bounds interception in the end zone with :36 remaining in the game.
Despite the offensive struggles for Water Valley, Russo believes that his defense should shoulder plenty of the blame.
“We absolutely cannot give up a touchdown on the last drive before the half and on the last drive of the game.  Both of those times we had the lead,” said Russo.  “We’ve got to step up as a unit and get off the field.  We will now have to refocus on the even bigger goals.”
Water Valley heads into their regular season finale against Mantachie (5-5 overall, 2-2 division) needing to win to clinch home field advantage in the first round of playoffs.  The Mustangs had won three out of their previous four before losing at Nettleton last Friday 28-27.
The Blue Devils defeated Mantachie 42-6 in last season’s regular season finale.  This Friday night will mark the last regular season home game for Water Valley standouts Bailey, Jeoffrey Gordon, Taylor Edwards,  O’Kedrik Campbell, and Justin McCammon.