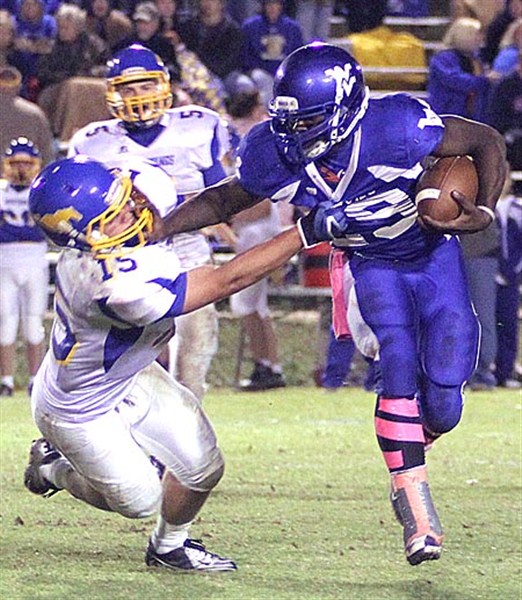 A Mustang defender learns it takes more than a piece of jersey to tackle Blue Devil Jeoffrey Gordon. The players wore pink in honor of breast cancer awareness. – Photo by Claudia Anthony


WATER VALLEY – The Blue Devils (9-2 overall, 4-1 division) wrapped up their regular season with an emphatic 56-3 victory over the Mantanchie Mustangs (5-6 overall, 2-3 division).  Led by a dominant ground performance from E.J. Bounds, Brandon Bounds, Jeoffrey Gordon, and Jarard Williams, the Blue Devils jumped out to a 41-3 halftime lead as Water Valley secured the two seed in Region 2-3A.
E.J. and Brandon Bounds both found the end zone on the ground, while Williams recorded two rushing touchdowns as well as a touchdown reception.  Robert Mays and Elijah Rogers rounded off the scoring for the Blue Devils with touchdowns of their own.
Water Valley rushed for 391 yards on just 31 carries and seven touchdowns on the night.  Eight Blue Devils recorded 20 yards rushing or more, while Rogers, Williams, Mays, E.J. and Brandon Bounds all rushed for 45 yards or more.
Defensively, Quinterrio Bailey put in another strong performance in his last regular season home game as a Blue Devil, racking up 13 tackles, three quarterback hurries, and a fumble recovery on senior night.  Dillon Zinn’s nine tackles ranked second on the team.
“It was a very solid night by our defense. We responded well to coaching in practice last week after a disappointing result versus Aberdeen,” said Water Valley Defensive Coordina-tor Richard Russo.  “Coach (Lynn) Moore and the Mustangs have a solid offense that keeps you on your toes. Our players knew their assignments and kept them from getting in any kind of rhythm offensively.”
Mantachie was limited to 116 total yards, including only 25 thru the air.  The Mustangs averaged 25 points per game in the three games leading up to their matchup with the Blue Devils.
Aberdeen, Water Valley, Mooreville, and Mantachie will represent Region 2-3A in the 2012 playoffs, with the Bulldogs and Blue Devils looking to challenge the heavily favored Charleston Tigers.
Water Valley will now host local foe North Panola (5-5 overall, 3-2 division) in the first round of the 3A playoffs. The Cougars bounced back from an 0-3 start to win five out of their last seven games. North Panola finished 1-9 in 2011, but first year head coach Derek King led the Cougars to the most regular season wins for the program since 2008.
Under Blue Devil Head Coach Brad Embry, Water Valley is 3-1 in first round playoff games, the only loss coming in 2008 to Leland in the 2A playoffs.  The winner of the Water Valley/North Panola first round matchup will advance to face the winner of the Cleveland East Side/Kossuth first round game.  Cleveland East Side eliminated Water Valley from last year’s playoffs, and at 11-0, Roger Burton’s squad is again a favorite to reach North Half.
With a win over North Panola, Water Valley will notch their third straight double digit win total under Embry.