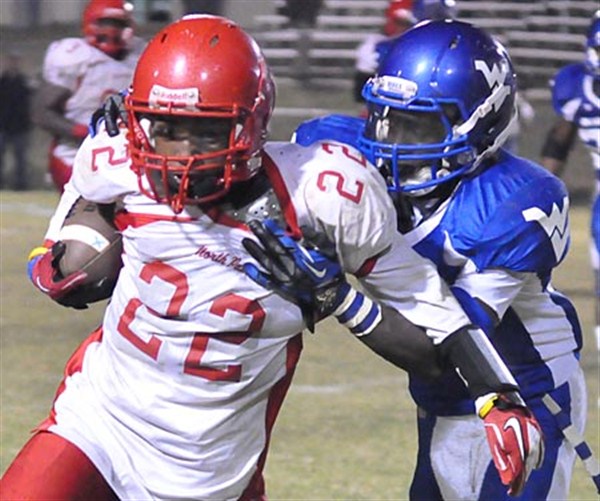 Cortaveous Hawkins closes in for the tackle against the North Panola Cougars. The Blue Devils won the first round of the playoffs and will face East Side on Friday. – Photo by Mark Anthony


WATER VALLEY – Win and advance is the mantra for the Water Valley Blue Devils this time of year, and in the program’s 700th game, Head Coach Brad Embry’s squad did just that with a 41-22 win over North Panola.
The Blue Devils (10-2 overall, 4-1 division) advance to 4-1 in first round playoff games under Embry, and will now turn their attention to a second round trip to undefeated Cleveland East Side.
Water Valley dictated the matchup with North Panola (5-6 overall, 3-2 division) throughout, jumping out to 20-0 halftime lead.
“We played well early, defense played well, we scored 20 points in the first half versus an athletic team.  I think we relaxed a little bit in the second half, we put some kids in to let them play and we gave up some touchdowns, but that’s okay,” said Embry.  “The name of the game right now is win and advance.”
Jeoffrey Gordon capped off the Blue Devils second drive of the night with a two yard rushing touchdown, while L.J. Hawkins hauled in a 28 yard touchdown reception to extend the Water Valley lead to 13-0 with 5:58 remaining in the first half.
On North Panola’s ensuing possession, the Water Valley defense forced their third turnover of the first half.  T.T. Person returned a Willie Hibler interception 47 yards for a touchdown with 3:56 left before halftime, pushing Water Valley out to a 20-0 lead.
“North Panola is full of athletes. We had a great plan and the kids executed it to the fullest extent in the first half. They had 79 yards at the half and zero points,” said Water Valley Defensive Coordinator Richard Russo.  “I loved that our kids forced three turnovers in the first half and took one in for the score.”
Hibler, who finished the night with 265 yards passing and three touchdowns, was forced into mistakes early and often by the Blue Devil defense.  Defensive Line coach Bryant Mix’s front four enjoyed arguably their strongest game of the season, recording 29 tackles and four sacks, while only giving up 53 yards on the ground.
Water Valley extended their lead to 27-0 on their first possession of the second half, as Brandon Bounds sprinted in for a 15 yard touchdown.  After a North Panola turnover on downs, E.J. Bounds found the end zone with a two yard run, giving the Blue Devils a 34-0 lead with 4:28 remaining in the third quarter
North Panola found the end zone on their next possession, as Hibler found Darius Thomas for a 26 yard touchdown reception.  A successful two-point conversion cut the lead to 34-8 heading into the fourth quarter.
Hibler pulled the Cougars to 34-14 with 5:58 left in the game as the sophomore signal caller found Robert Oliver for a eight yard touchdown reception.
“In the end, we had some young guys in the secondary and we blew some coverages, but they’ll be able to work on that in practice,” said Embry.  “Its hard to practice hard when you don’t think you’re going to play, but now that they’ve been introduced to it, they’ll be fine.”
Water Valley killed off any potential Cougar rally four plays later, as E.J. Bounds found Hawkins again, this time for a 40 yard touchdown reception in the front corner of the end zone, making the score 41-14 with 3:57 left in the game.
“(Hawkins) is a weapon for us, he’s young and he plays on defense, so we have to spot play him on offense,” said Embry.  “Throughout the game, we watch and see how the opponent is playing us, and we know people are going to try to stop the run, so he is a weapon out there, especially if you get favorable coverage.”
The 2012 Blue Devils have now recorded the third most points in a single season in school history, with at least one game remaining on the schedule.
“We’ve got some weapons on offense when we’re healthy and we’re starting to get healthy.  Obviously you want to win, but its nice to win and play well,” said Embry.  “The teams that get better every week are the teams that are going to keep advancing.”
Hibler capped off the scoring on the night with a six yard touchdown run with :46 remanning in the game, bringing the score to 41-22.
Water Valley will now travel to face Cleveland East Side (12-0 overall, 5-0 division).  The Trojans eliminated Water Valley in the third round of the 2011 playoffs, but Embry is expecting a different test this time around and has ruled out revenge as a motivating factor.
“Last year we just ran into a game and we didn’t make a play or two, but I think we’re ready this year.  Coach (Roger) Burton is a good coach, its his first year there,” said Embry.  “I hope we don’t have the thought of revenge, because that doesn’t usually work out very well.  We just need to worry about how they line up and play on defense and offense.”
The Trojans have had only one win decided by less than 10 points, while they have beaten their six opponents by an average of 20.6 points per game.  East Side defeated Kossuth 44-22 in the opening round of the playoffs.