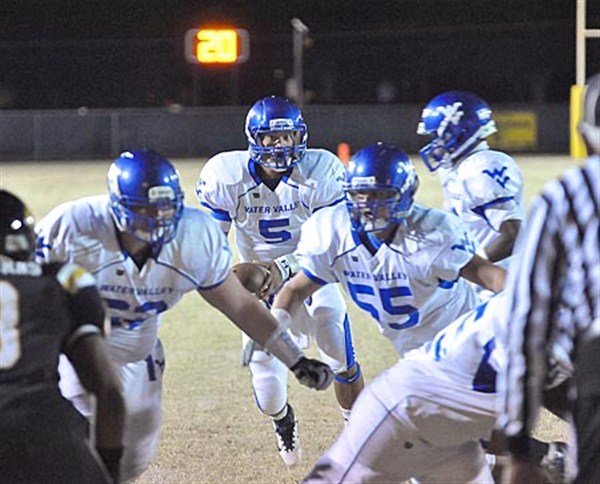 Quarterback E.J. Bounds (center) picks up a block as he keeps the ball to pick up some nice yardage. – Photo by Mark Anthony


CLEVELAND – It’s been an all too familiar feeling for Water Valley Head Coach Brad Embry.  Three straight years his Blue Devils have been bounced from the 3A playoffs on the heels of their own costly mistakes.
After Water Valley had seized the momentum at Cleveland East Side last Friday night, it looked as if the Blue Devils were on their way to the third round.  However, it was again self-inflicted wounds that proved to be the undoing for Embry’s squad as Water Valley (10-3) bowed out of the playoffs to East Side (13-0) 26-24.
“I’ve been beaten by better teams before, but we didn’t get beat by a better team tonight, we just got beat.  That’s the truth of the matter,” said Embry.
The fifth year head coach couldn’t hide his disappointment after the game, as many Blue Devils and staff were reduced to tears.  When asked if this was his toughest loss in his five year tenure, Embry admitted this is one that will linger with him.
“Yeah probably (this is my toughest loss), I would say so, that’s fair to say.  We’ll be fine, obviously we’re not happy about it, but we’ll be fine,” said Embry.  “That’s one that you think we probably should’ve won.”
East Side jumped out to an early lead as Barron Burns capped off an 11 play, 76 yard opening drive with a seven yard touchdown run.  A failed two point conversion kept the score at 6-0 with 7:03 remaining in the first quarter.
Water Valley answered just seven plays later on their opening drive, as junior quarterback E.J. Bounds connected with T.T. Persons for a 30 yard touchdown reception.  Alex Robles converted the extra point to give the Blue Devils a 7-6 lead with 3:15 left in the first quarter.
The Blue Devils would offer very little for the remainder of the first half, running just six more plays.  At halftime, East Side had run 40 plays, to 13 for Water Valley.
Jaylon Thomas put East Side ahead with 6:46 remaining in the first half with a nine yard touchdown run.  Again, an unsuccessful two point conversion kept the score at 12-7 at halftime.
“We knew we could run the ball and score against them, we just didn’t have the ball in the first half.  I think we ran 10 or 11 plays in the entire first half,” said Embry.  “We were down at half instead of being up like we should’ve been.  To run that many plays and score seven points isn’t bad.”
Water Valley nearly jumped out to an early second half lead, but Bounds was intercepted in the end zone as he looked for Persons again.
East Side capitalized on the Water Valley mistake, scoring just six plays later on a Quadre Butler 53 yard touchdown run, which was highlighted by poor Blue Devil tackling.  Water Valley stopped the East Side two point conversion, keeping the score at 18-7 with 5:25 left in the third quarter.
“In the first half, we just didn’t tackle well and in the second half, we tackled well, we just gave up a few big plays,” said Embry.  “It’s one of those things, you meet a good opponent and you can’t do what we did.”
With their backs against the wall, Bounds led his team on a six play, 73 yard touchdown drive on the ensuing possession, capped off by a five yard Bounds touchdown run.  Robles extra point cut East Side’s lead to 18-14 with 3:37 left in the third quarter.
The Blue Devils forced one of the few East Side mistakes on the night on the following kickoff, as Embry noticed an open area in the East Side return team.  Waving his arms feverishly on the sideline, Embry caught the attention of Robles, and the sophomore kicker dropped the ball in perfectly.  After a brief scramble, Water Valley’s L.J. Hawkins recovered the kickoff on the East Side 16 yard line.
“We just have kickoffs where if we have a lot of open grass, we’ll kick it to that, and Robles spotted it perfectly,” said Embry.  “The guy got to it, but he didn’t have time to tuck it away.”
Hawkins found the end zone just three plays later, as Bounds found the sophomore wide out for a 10 yard touchdown reception, giving the Blue Devils a 21-18 lead with 2:25 remaining in the third quarter.
A Robles 37 yard field goal midway thru the fourth quarter extended Water Valley’s lead to 24-18, but with 2:51 left in the game, everything changed for the Blue Devils.
A halfback pass from Thomas, a play that East Side had previously tried twice, found a wide open Burns for a 74 yard touchdown, giving the Trojans the 26-24 lead.
Things soon went from bad to worse for Water Valley, as James Washington fumbled the ensuing kickoff, the Blue Devils second turnover on kickoff returns on the night.  East Side ran out the remaining time.
“It was a game of mistakes, mental mistakes.  We fumbled two kickoff returns, and you can’t do that,” said Embry.  “Most times in the playoffs, that’s how its going to end, you’re either going to win a state championship, or you’re going to exit on a close loss.”
Water Valley’s second round playoff exit means the high school careers of leaders Quinterrio Bailey, Jeoffrey Gordon, Taylor Edwards, and a standout defensive front four of Justin McCammon, B.J. White, James Harris, and O’Kedrik Campbell has come to a close.  The 2012 Blue Devil senior class finished their career with a 39-14 record, a 2011 division championship, and four straight playoff appearances.
“It’s a great bunch of kids and a great bunch of football players.  They built this program and program’s are built to reload.  They’ve taught these other kids how to do things right,” said Embry.  “I’m proud of those seniors, I’m not going to judge their careers on one loss, it’s a program, not a one hit wonder.”
East Side advances to play Byhalia (9-4) in the third round of the 3A playoffs.