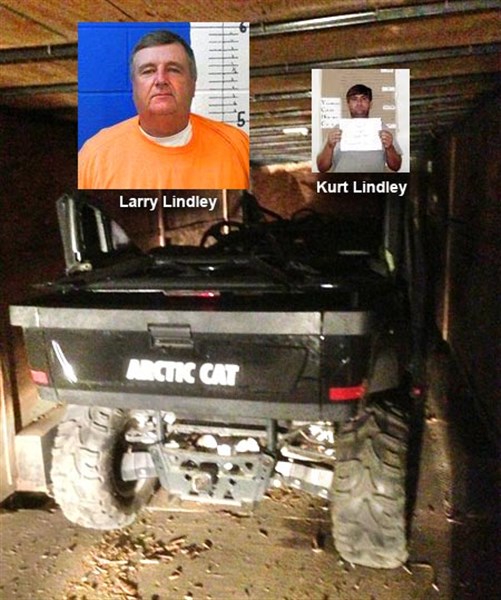 A father and son face multiple charges after authorities linked them to four stolen ATVs recovered near Oakland Wednesday night.
Larry Joe Lindley and Kurt Lindley of Charleston were charged with possession of stolen property and conspiracy to commit a crime, according to Yalobusha County Sheriff Lance Humphreys.
The arrests were made around midnight Wednesday after deputies from Yalobusha and Tallahatchie executed a search warrant on property owned by Larry Joe Lindley near Oakland. Agents with the Mississippi Bureau of Investigation also assisted in the operation.
“We recovered four stolen Arctic Cat Prowlers valued at almost $50,000 in two different enclosed trailers after executing the search warrant,” Humphreys reported.
From there, the authorities traveled to Larry Lindley’s residence on Hwy. 35, south of Charleston, where both men were taken into custody.  Larry Joe Lindley was booked in the Calhoun County Jail and Kurt Lindley was booked in the Tallahatchie County jail because the Yalobusha jail was full.
Humphreys said a $30,000 bond was set on both men during an initial appearance Thursday afternoon. Both men posted bond and were released.
The four stolen Arctic Cats were among 10 ATVs stolen from an enclosed storage yard at Staten’s Auto, Truck and Tractor Parts located on Main Street in Charleston. The theft occurred on August 6 and the total value of all 10 units was over $100,000, according to a report in the Sun Sentinel.
Charleston Police Chief John Page told the Sentinel the ATVs had been left parked overnight with keys in them because they were to be loaded onto a tractor trailer for shipping back to the distributor.
Page also told the Sentinel that the front gate on a chain link fence surrounded the storage yard was supposed to be closed and locked to prevent unauthorized access. Page said when the ATVs were reported missing, the gate was said to be open and unlocked.
The four recovered ATVs were impounded by the Yalobusha County sheriff’s department.
“We can’t release any additional details about this incident yet, it remains under investigation,” Humphreys added.