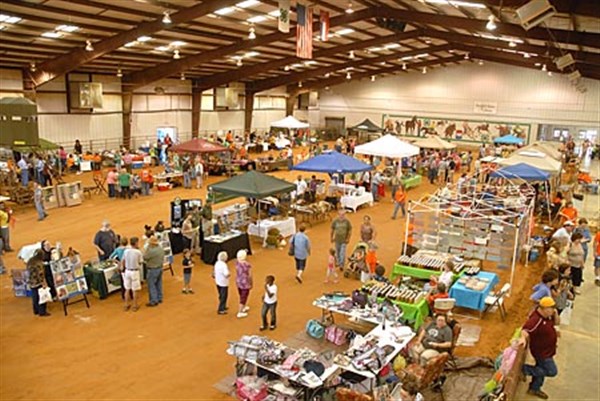 The threat of inclement weather pushed the Celebrate Coffeeville weekend inside the Multi-Purpose Building earlier this month on an unseasonably warm Saturday. County officials are considering installing fans to help cool the facility. Photo by Jack Gurner


COFFEEVILLE–Supervisors are considering spending thousands of dollars to install fans to help cool the Multi-purpose Building.
But it’s an investment that could lead to bigger and better events at the county-owned facility located on Hwy. 7 in Coffeeville, according to the county’s extension service director, Brent Gray.
The topic surfaced during a Board of Supervisor’s recessed meeting Oct. 7, following Celebrate Coffee-ville that was held in the building on Oct. 5–an unseasonably warm October day.
Air conditioning has all but been ruled out as the estimated cost could top $200,000. Instead Yalobusha county agent Brent Gray explained that  installing two big ceiling fans and several evaporator fans at a cost of approximately $15,000.
“If we got some kind of cooling down there, whether it be expensive or un-expensive, do you think it will help us in getting future events?” District 3 Super-visor Lee McMinn asked Gray.
“I think it would help tremendously,” Gray said.
“For example, the archery event that is coming up in April?” McMinn asked, referring to the Archery in Mississippi Schools 2014 North State Qualifier that will be held in April inside the building.
“If it is as hot in April as it was Saturday (Oct. 5) in there, we will lose the event next year (2015),” Gray responded.  But, Gray added, if the event goes well, the county will likely be asked to continue hosting the event each year.
Gray explained that the archery event was initially scheduled in the summer months but organizers agreed to push it back to April because the facility is not air-conditioned.
“It’s most likely it is going to be cool in April,” Gray explained.
“That’s going to be a real big impact to the community. You are looking at about 5,000 to 6,000 people in two days coming through there,” Gray added.     “There will be other events I think we can pick up because of it, too. And it will give us a longer timespan to have events in there,” Gray said.
“Right now we are pretty much locked into winter months and fall,” Board President Tommy Vaughn agreed.
“From May until October, it is pretty miserable in there,” Gray said.
Supervisors then tabled the matter for further review next month.