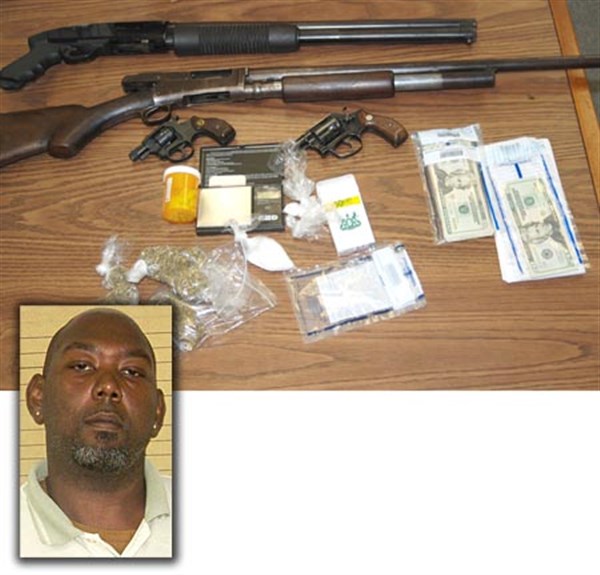 Guns, Dope And Cash – Sheriff Lance Humphreys, eight deputies and a reserve deputy executed a search warrant at dawn Monday morning. The extra manpower and early entry was warranted because of intelligence of multiple firearms inside the residence, according to the sheriff. Deputies discovered four weapons, including a loaded shotgun beside the bed where the suspect, Kedrick Chillis (inset), was sleeping. Also seized were cocaine, marijuana and pills.


OAKLAND–An Oakland man is behind bars after deputies raided his home on Walnut Street early Monday morning.
Kedrick Chillis was taken into custody without incident around 6:30 a.m. after the sheriff’s department obtained a search warrant to enter the residence. Chillis has been charged with possession of cocaine with intent to distribute, possession of marijuana with intent to distribute and possession of a class 2 controlled substance.
“We went in hard and fast, we had intelligence that there were multiple firearms inside the residence,” Sheriff Lance Humphreys told the Herald.
Chillis and two other occupants inside the home were sleeping when nine law enforcement agents surrounded and forcefully entered the home.
A 12-gauge, pistol-handle shotgun was resting in the room where Chillis was sleeping.
“It had seven rounds, buckshots and slugs staggered in the magazine,” the sheriff said. Also seized was a second shotgun and two pistols.
Deputies also discovered three ounces of marijuana, over an ounce of cocaine–powder and crack, and more than 100 hydrocodone pills. Also seized was $148 in currency.
Humphreys said Chillis also had two surveillance cameras on the front of his home, one facing north and another south looking down the street. Inside the home were two monitors where the occupants could monitor the street.
“This is another case where neighbors likely knew of his alleged activity, but it took us some time to build the case,” Humphreys said. Officers had worked on it for several months.
Chillis was transported to the Yalobusha County Jail after his arrest. Justice Court Judge Steve Riley set a $150,000 bond for Chillis Monday afternoon during an initial appearance. He remains incarcerated at press time.