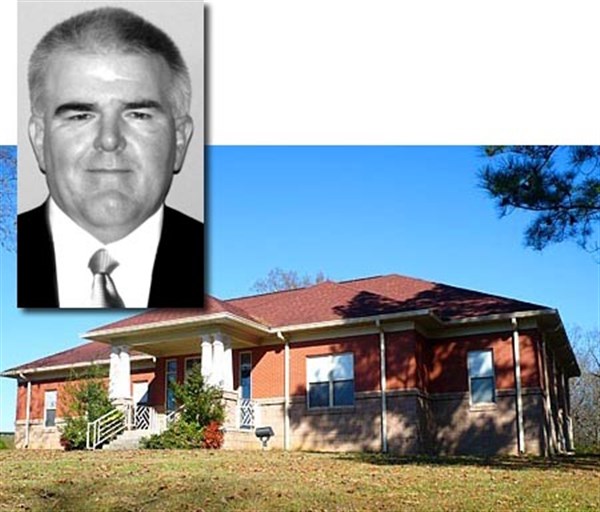 Bryan Gilley (inset) The Water Valley School District office is in the background.


WATER VALLEY – Bryan Gilley was appointed Monday night to fill the vacated District One position on the Water Valley School District Board of Trustees effective immediately.
Chris Terry, who was elected last November to serve a five-year term, resigned because he is building a new home and moving out of the district. Terry and Gilley ran against each other with Terry winning by only 13 votes.
At Monday night’s meeting, trustee Taylor Trusty asked board president Lamar Burgess to read the law regarding appointment of a replacement trustee to fill an unexpired term.
Burgess read that all vacancies should be filled by appointment by the trustees. But, the person appointed would only serve until the next general election at which time a person will be elected to serve the remainder of the unexpired term, which will be three years.
Burgess said that the person they were about to appoint would serve until the next General Election in November of 2014 and the person elected would take office immediately.
That will put two school board seats up for election in 2014, Burgess added.
Trustee Casey Washington said that he thought it would be appropriate to reach out to Bryan Gilley. “He was running as an opponent to Chris and it was a very close race. I have been in conversation with him and asked if his name was brought up would he be willing to serve. He stated he would.”
Washington made the motion to appoint Gilley and Trusty seconded. The vote was unanimous.
Gilley is a graduate of Water Valley High School and has worked in the grocery/food service industry for over 29 years. He is married to Leasie Thompson Gilley and they have two children, Kainen Gilley and Marie Gilley Martin.


WATER VALLEY – The  school district will soon receive funds to help pay for trained law enforcement officers on the Davidson Elementary School and Water Valley High School campuses with the start of the Mississippi Community Oriented Policing program.
The Board of Education is allocating $1.57 million to place 157 trained officers in public schools in 50 districts around the state including Water Valley, which received $20,000 for two officers.
“I’m proud we can place 157 additional trained officers in Mississippi schools to protect the precious lives of children,” Lt. Gov. Tate  Reeves said. “MCOPS is an example of a state and local community partnership that can provide a service citizens want, and I look forward to seeing even more schools take advantage of the program in the future.”
The program, proposed by Lt. Gov. Reeves, provides up to $10,000 to pay for a certified law enforcement officer at a public school. The local community will fund the remaining costs.
Reeves proposed MCOPS in response to the 2012 shooting at Sandy Hook Elementary School in Newtown, Conn., which left 20 children and six adults dead.
Law enforcement officers will be required to train in the Advanced Law Enforcement Rapid Response Training program, which is used by law enforcement nationwide to train officers on responding to shooting incidents.


Davidson Elementary
All Acuity (screener/progress monitoring/diagnostic software) testing has been completed.  DES also used Dibels and diagnostic assessments from Reading Street. Due to technology problems, there was a delay in getting the data uploaded immediately after testing.  These problems delayed our ability to begin “Power Hour” – the in-house tutoring/enrichment that we will provided to our students. DES will begin Power Hour on Friday, Oct. 25 using the baseline data from Acuity and proficiency levels from prior year MCT2 assessments.  Teachers have provided the principal with data on each child in their classroom (K-6); from this information, the administrative team will begin to disaggregate the data and find a place to display it (data wall/room).

Power Hour will provide the opportunity for every child to receive either remediation or enrichment.  Our goal is for every student to have the opportunity to grow from our lowest students (remediation) all the way to our highest performing students (enrichment).  Students will be placed in flexible groups based on their assessment data and specific skills will be taught to increase their academic performance.  We will use Accelerated Reader/Star Math/Star Reader and My Reading Coach to track the progress of these students once we get these programs in place.  Power Hour will be weekly (every Friday) from 2:00 – dismissal.  We are hopeful this will also eliminate some of the early checkouts on Friday afternoons which affects our attendance.

DES had our first Family Study Night on September 26 where the parents became the student for an hour and a half.  We were pleased with our first turnout of approximately 80 parents, many of whom asked if we would continue this in order for them to assist their children. Our teachers did a good job of informing parents of the skills they have worked on this grading period.  We will likely have more Family Study Nights that may be grade specific and/or subject specific.

DES had our first character breakfast for students that have shown outstanding character in and out of the classroom.  Each teacher chose a student to represent their class that had shown good character traits.  Parents were invited to have breakfast with our character students and Mr. Calvin Hawkins was the motivational speaker for the breakfast.
The students at Davidson Elementary School are working very hard to earn Davidson Dollars for positive behavior.  Students that did not get any ODR’s (Office Discipline Referrals) were treated to an end of day dance in the hallway.  Those students were given about 15 minutes to dance in the hallway.  Our paraprofessionals monitored the appropriateness of the dancing.

DES Kindergarten and First Grade students have visited Bull Bottom Farms in Winona, MS as their fall field trip.  The students were able to learn about life on the farm.  They had the opportunity to enjoy the corn maze and pumpkin patch as well as a good ole fashioned cow train! The students also learned about farm animals, played country games, and much more! Each grade had an entourage of parents that went along and we appreciate our parents for attending.  Every child was able to pick their own pumpkin and brought Dr. Gary a huge white pumpkin!

During fire prevention week, Mr. Sherman Gooch, Water Valley Fire Chief, brought the big red fire truck for our K-2 graders.  All of the students enjoyed watching demonstrations from Mr. Gooch and his firemen from putting on their fire suits to explaining the oxygen tanks.  The highlights of the fire truck visit, of course, were the flashing lights and the sirens!

Water Valley High School
WVHS students who are interested in the Mississippi School for the Arts visited with Sydney Nelson, former WVHS student and current student of MSA on Friday, October 18.  WVHS is routinely represented at the school and though we hate to lose them on our campus we are extremely proud of our MSA students.  The application/audition process is rigorous and competitive.  It is quite an honor to have students in attendance at MSA.

Several WVHS sophomores took the PSAT on Wednesday, October 16th.  We eagerly await the return of scores to these students to see how they performed on this examination.

On Friday of this week, October 25, WVHS will host a Blood Drive from 9:00 until 1:00.  This is open to the community so come by and donate blood if you can.  The drive will be held in the Health Sciences classroom and is hosted by Ms. South and her Health Sciences students.

Senior Night will be on Friday October 25th during the home football game against Independence.  The students of WVHS will celebrate with our senior athletes, band members and cheerleaders during an on-campus Pep Rally during the school day.  These same students will be honored with their parents during pre-game ceremonies of the football game. Water Valley Football team is 8-1 and will be headed into the state playoffs in November.

As football continues, basketball is right around the corner.  The Junior High Devils open their season one week from tonight (October 28th) at Coffeeville with games against the Pirates.  Varsity is scheduled to begin play in mid-November.  We wish all of our basketball teams a successful season.

Teachers at WVHS enjoyed a PD session with Ms. Lois Kappler from the RCU at Mississippi State on Friday, October 11.  Ms. Kappler led the teachers through a process of writing SMART Goals which will be a part of their M-STAR process during the spring summative assessment.  Teachers also reviewed the Circle Survey process which is tied to MPES (Principal’s Evaluation).  Teachers spent the afternoon hosting parent conferences before going home for fall break.

Board meetings for November are planned for 4th and 18th.  November 4th meeting may be canceled if not necessary.