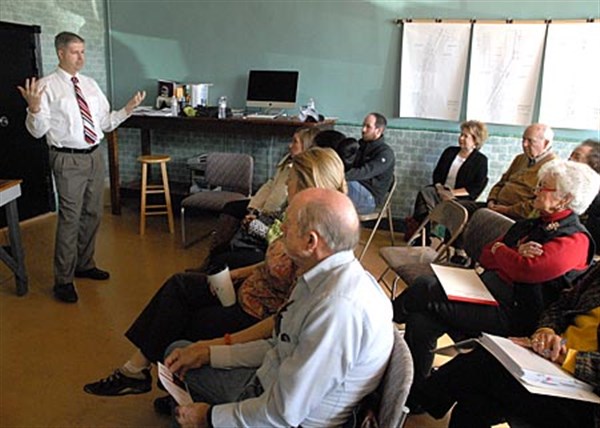 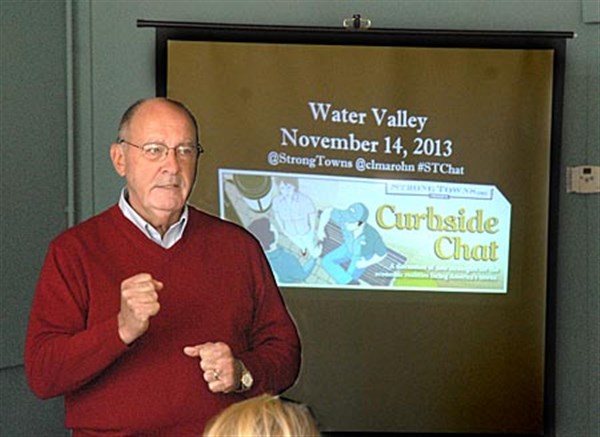 Chuck Marohn of Strong Towns was in the Valley last week. Chuck is a civil engineer by trade, so his talk on how infrastructure cost can kill a small town comes from experience. Now I’ll grant you the graphs and charts in Chuck’s presentation are not the warm and fuzzy images you’ll see in other small town sustainability talks, but the 25 folks who came last Thursday morning got a long range insight in how short term planning can really hurt a town in the long run.
Chuck’s message was that towns growing in a horizontal spreading pattern, those ever widening circles from the core, overstretch infrastructure without taking into account long-term upkeep and maintenance. And then these towns have to either rely on state or federal grants to keep things going or patch infrastructure as things fall apart–making them weak towns.
His point is that many infrastructure systems—from sewers to water to electrical grids to roads and bridges—are reaching the end of their design life. And to be a strong town, a place must have the economic vitality to replace and repair these systems on its own.
A big point of Chuck’s talk was that humans have been living in towns for 10,000 years and building up and over again and again. Staying in one place and going up vertically, if you will.
It is only in the automobile age of the last 70 years that has allowed us to spread out horizontally and less efficiently to a point where most live in a non-walkable environment.
We are dependant on the machine and its infrastructure needs. And that’s not efficient and in Chuck’s opinion, not strong or smart.
Another facet of this vertical efficiency is that the wealth built (think of infrastructure and buildings as real assets and accumulated wealth) is leveraged up and again. Build out horizontally and completely new with concentric rings and that wealth and strength is lost.
There is big construction dumpster parked downtown again. Remember construction dumpsters are a sure sign of renovation and progress. It is parked right on Main Street directly in front of the historic commercial building that was the most derelict in town.
And while some may lament that building gave the town a black eye or ask why it sat for eight years partially roofless, the main thing is the building is still standing and in process of being brought back. Brought back to be a working building and that means jobs and taxes and people going in and out of it and a whole bunch of other positives when a building returns to life on Main Street. The state it was in just prior to this clean up, it was hard for many to see that building as an asset. But it was and it is and it will be again. Imagine if the building were not there, it would be another empty lot, like a missing tooth in the smile of a once prosperous downtown. And that would be a shame.
So if you walk downtown and see the crew doing the hard grunt work of restoration, give them a thumbs up. They’re saving a real asset, a part of Water Valley’s history, and making a place for the town’s future.


WATER VALLEY – America’s cities and towns are going to have to take on more responsibility for their economic future by making changes in the way they look at growth.
The good news is that Water Valley is already moving in the right direction, according to Chuck Marohn, an engineer and planner from central Minnesota, who held a “Curbside Chat” last Thursday morning at the Water Valley Main Street office.
Marohn and Jim Kumon of Strong Towns were brought to the city by the Stennis Institute at Mississippi State University. Strong Towns is a non-profit organization whose mission is to support a model for growth that allows Amer-ica’s towns to become financially strong and resilient.
Marohn said that the current path cities are on is not financially stable. He gave examples of how cities are spending millions on infrastructure that doesn’t generate enough tax income to pay for basic maintenance.
One example was a housing development in a cul-de-sac with a paved road that only the residents used. He explained that it would take 37 years for the city that built it to recoup their initial investment. In the meantime, the road would require maintenance that would add even more to the costs.
“What we have done post World War II with small towns, we have done with the best of intentions, but ultimately what we have done is make these cities very fragile financially, very fragile socially and culturally,” he said. “It warms my heart to come here and see what you guys are doing and I hope you will realize what is going on here is so important.”
Marohn was referring to the work being done here to restore and repurpose the historic buildings on Main Street rather than abandoning the center city and expanding to outlying areas.
He also commented on a recent report put out by the Mississippi Department of Transportation that says they need to triple their budget just to maintain what they have already built. “That is a massive, massive deficient,” Marohn added.
“And, the private sector is tapped out,” he warned. “Our ability to continue to take on accelerated levels of debt is just simply not there.”
Marohn said that what it means is that local governments are going to be forced to take on the costs of our development path. “If we want that road fixed, we are going to have to pay for it. If we want that new water tower or that water treatment plant or that new library or what have you, we’re going to have to find a way to collectively pool our resources here locally to make that happen.”
He noted that we are going to shift to a different kind of economy. “I am not going to pretend to know what that is. I don’t know. I don’t think anyone can pretend to know,” Marohn said.
“What I do know is this. The main determinant of future prosperity will be the ability of local leaders to transform their communities.