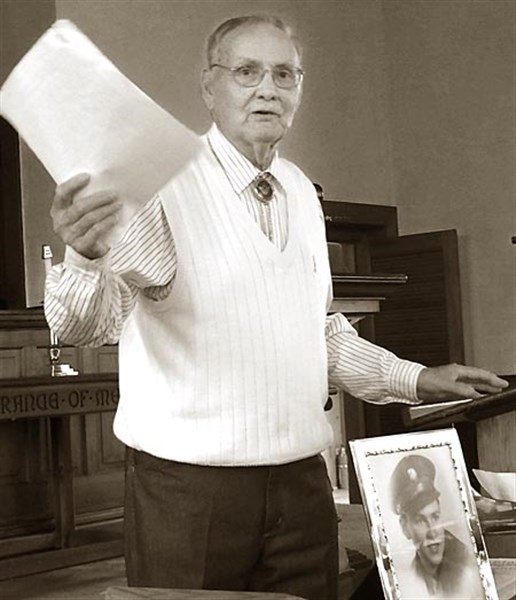 Eugene Spearman was the guest speaker at the February Yalobusha Historical Society meeting.


COFFEEVILLE– While picking cotton on his father’s hill farm near Coffeeville, Eugene Spearman was scolded because he enjoyed watching the horizon young pilots flew AT-6’s as from Columbus to Pine Bluff, Ark.
A World War II veteran, Spearman, took Yalo-busha Historical Society  (YHS) members back in time to when he was 19 years old and found himself living in a Quonset hut with 15 other young men in the Midlands of England.
The hut had eight double bunk beds in it, and Eugene had an upper bunk.  Some of the young men had flown almost all the required missions and others had flown varied amounts.  The location of the base was Grafton Underwood near Kettering, England, home of the 384th BG and 544th Sqn.
Spearman recalled the beginning of his military days, starting just after he completed high school when he went to Greenwood and volunteered in the cadet program.  He was sent to radio school in Sioux Falls, South Dakota.
After gunnery school in Yuma, Arizona, Spearman met the rest of the nine-man crew for six months of operational training in Avon Park, Florida.  After training the crew picked up a new B-17 at Hunter Field Georgia.
After buzzing the bombardier’s home at Staten Island, New York and making several stops, the B-17 was delivered to Edinburgh, Scotland.
After riding in a truck all night to Stone, England near Birmingham, Eugene and his crew were assigned to the base at Grafton Underwood.  About three or four o’clock in the morning, a sergeant would come into the little hut and wake the crewmen that were flying the mission that day.  After Spearman had already flown 23 missions the sergeant woke him up a said, “Spearman, be down at  the four o’clock briefing.  You are flying with the Ed Nicolai crew.”
Eugene dressed and went outside to a little English bike and rode to the mess hall that they called the Ptomaine Tavern.  The bike was acquired by going to the flight line and getting one that some previous crewman left because they did not return from the trip over Germany.
After breakfast the flight commander would tell the crew the target for the day.  On this particular day, it was the submarine base at Bremen. Next, the weather officer told about the weather over the target.  Then, a navigation officer would talk about the route in and out of Germany.  Then with a “Good Luck Boys-Hit the Target” send off, the crew filed out and picked up equipment, parachutes etc. and rode trucks to the dispersed planes.  Dressed in the heavy flight suits, Eugene thought everyone looked like stuffed toad frogs.
Usually Eugene saw “Brother Billy” holding a Bible when they taxied off.    Seeing Brother Billy was a blessing for Spearman, knowing that someone was praying.
The 384th history log showed the mission to Bremen was the three hundredth mission flown by the 384th BG.  There were 39 aircraft from Grafton Underwood and the total bomb load of 500 pound bombs was 105 tons.  The elevation was 26,000 feet.        On this mission the flak was moderate but accurate.  Spearman recalled his plane was in the left hand wing position and made a left hand turn off the target and was struck by flak shortly after releasing their bombs.  The pilot was slightly injured when the cockpit plexiglas and the copilot controls were hit. The waist gunner was hit by flak in the upper chest, but he was saved by his flak suit.
The tail gunner was killed when flak hit the tail section. Two engines were knocked out and the plane left formation and dove into some clouds and came out “on the deck.”  A landing was made at Eye with some 200 holes in the plane.
Their plane was called Snuffy and was S.N. 42-32106.  Eugene thought the plane would have been scraped due to flight damage but was repaired and returned to service.  Spearman said the entire story is available at 384th Bomb Group.com.
Notes of interest at the February YHS meeting include:
• Mike Worsham welcomed members and guest.
• Lawrence Litten voiced a prayer.
• Debby Hughes read the monthly financial report.
• Julia Fernandez announced that Spencer Keith will be the speaker for the March 20 meeting. His topic will be the Battle of Brice Crossroads June 1864.
Attendees included:  Debby Hughes, Mike Worsham, John Perkins, Ruth Perkins, Julia Fernandez, Ruth Spearman, Bobby Koonce, Stan McCarver, Betty Stewart, Sonny Stewart, Pat Rodrigue, Spearman, Sarah Saucier, Lawrence Litten, Betti Litten, G.C. Vaughn, Harold R. Hughes, Linda Williamson, Barry Spear-man, Sandra Spearman, Mike Ayers, Jean M. Scobey, Mark Scobey, Gary Tippit, Joy Tippit, Billy Pate, Jerry Harris, Carl H. Vick, Barron Caulfield, Wayne Turner, Dave Hovey, Emma Hovey, Jimmie Pinnix, Francine Pinnix, Thelma Roberts, Tom Cox, Julia Thompson, Sue Fly, Jean Arrington, Betty Miller, Kay McCulley, James Person and  Opal Wright.