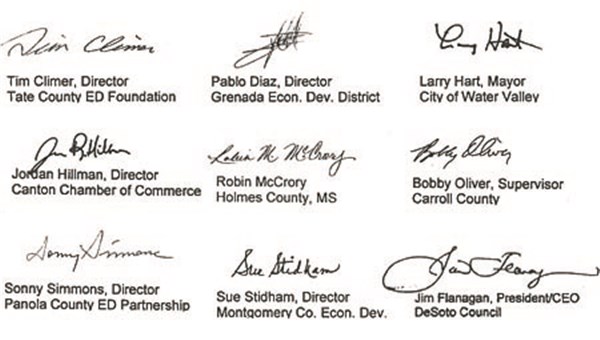 By Representatives of Counties Affected by
the Grenada Railway Impending Closure


The impending abandonment of Grenada Railway in north central Mississippi could mark the beginning of the dismantling of the State’s second most important short line rail corridor.  This corridor supports 11,174 jobs, $1.3 billion in gross product, and $1 billion in personal income, according to a 2013 study commissioned by the Mississippi Development Authority and the Mississippi Department of Transportation.
A number of counties in north central Mississippi have the most to lose from this abandonment and now some members of the Mississippi Legislature have developed a potential solution to the issue by seeking approval of House Bill 1537 (authored by Representatives Howell, Beckett, Clark, Gunn, Hamilton, Horan, Jennings, Lamar, Martinson, Mettetal, Nelson, Reynolds, Smith and White).  The bill, which was recently passed by a majority of the representatives in the Mississippi House, has now been sent to the Senate, where, if no action is taken on it, the result will be the abandonment and removal of the south end of the line – taking away a key asset for any future job creation in the region.
North Central Mississippi is confronting an imminent threat. The only rail line available to this region, Grenada Railway (from Desoto County to Madison County), faces abandonment of more than 70 miles of its 180 miles of rail, and a decision on the matter could be ruled on by the Surface Transportation Board (STB) as early as April.
If the abandonment proceeds, the counties of Montgomery, Carroll, Holmes, and parts of Madison, will cease to have rail access; and the Kosciusko & Southwestern line, owned by MDOT, will become orphaned without a connection to any rail at either end. All other area counties not immediately threatened by the current abandonment will have no direct way to get products by rail to international ports or Mexico.
The effects of abandonment would be swift, killing jobs in the near future. But more problems lie ahead, as many are convinced that the north end of the line could be targeted for abandonment as well, putting at risk more than 9,500 existing jobs and millions of dollars of economic impact currently sustained by companies using the line. For example, Grenada’s Resolute Forest Products, which has an economic impact of more than $100 million dollars annually, sustains 170 direct and 550 indirect jobs and ships the majority of its products to Mexico via this rail corridor.
Canadian National sold this line to A&K Railroad in 2009, and A&K petitioned for abandonment of the south portion in 2011. A&K eventually withdrew that petition and then placed an embargo on the south portion. These events ultimately forced customer like Resolute to have to ship north to Memphis and then south to Mexico.  Last December, A&K filed for abandonment again, and this time the only recourse left to save the line is through a direct sale agreement with the current owners.
The North Mississippi Regional Rail Authority (NMRRA), created in 2011 by the counties of Tate, Panola, Yalobusha, Grenada, Montgomery, Carroll and Holmes, has reached a preliminary agreement with A&K to purchase the entire line from DeSoto County to Madison County. The Authority has identified reputable rail operating companies interested in signing agreements to lease the rail line and invest in it to improve its condition. This initiative, which is being led by legislators in both the House and Senate, seeks to eliminate the threat of abandonment and to secure the availability of long term rail service for all counties in north central Mississippi, thus preserving a key economic development tool for the State.
If this issue is not resolved in the 2014 legislative session, the result would be the obliteration of any potential economic development in the region. The NMRRA has worked diligently over the past four years with the region’s leaders to get to this juncture and fully supports passage of HB 1537.