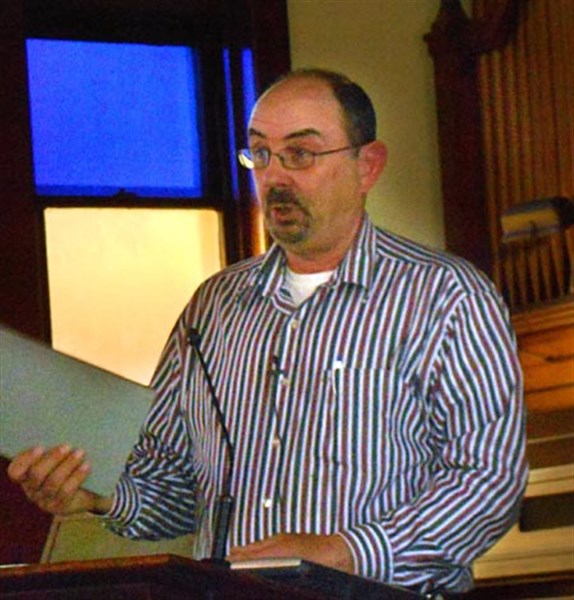 For Union General, Return Trip To Memphis Was Much Faster With Forrest On His Heels


COFFEEVILLE– Although it took Gen. Samuel D. Sturgis’s cavalry two weeks to reach Brice’s Crossroads from Memphis, it only took General Nathan Bedford Forrest and his army two days to chase General Sturgis and his army back to Memphis from Brice’s Crossroads.
That was the report from Grenadian Keith Spence, who entertained members of the Yalobusha Historical Society with an accounting of the Battle of Brice’s Crossroads that occurred June 1864 on March 20, 2014.
Spence’s interest in this subject started in 1961, when he was 10 year-old and was intrigued by the Commercial Appeal Sunday Edition, and Gen. Nathan Bedford Forrest became his hero.
Union Gen. William Tecumseh Sherman has long known that his supply and communication lines through Tennessee were in serious jeopardy because of Forrest’s cavalry raids.  To halt Forrest’s activities, he ordered Gen. Sturgis to conduct a penetration into northern Mississippi and Alabama with a force of around 8,500 troops to destroy Forrest and his command.
Forrest was alerted of Sturgis’ movement, but he was unsure of the Union Army’s intentions and concluded that Sturgis had actually targeted Tupelo, about 15 miles south of Brice’s Crossroads. Forrest was badly outnumbered, but he decided to force Sturgis back and selected an area to attack ahead on Sturgis’s projected path. He chose Brice’s Crossroads, which is now in Lee County.
Brice’s Crossroads had featured four muddy roads, heavily wooded areas, and the natural boundary of the Tishomingo Creek, which had only one bridge going east to west.  Forrest, seeing that the Union Calvary moved three hours ahead of its own infantry, devised a plan that called for an attack on the Union cavalry first, with the idea of forcing the enemy infantry to hurry to assist them.  Their infantry would be too tired to offer real help and the Confederates planned to push the entire Union force against the creek to the west.
Forrest dispatched most of his men to two nearby towns to wait.
On June 10, 1864 the Union Calvary reached Brice’s Crossroads and the battle started. Forrest ordered the rest of his cavalry to converge around the crossroads.  The remainder of the Union cavalry arrived in support but a strong Confederate assault soon pushed them back when the balance of Forrest’s Calvary arrived on the scene.
Union infantry support was called.  The Union Line bolstered by the infantry briefly seized the momentum and attacked the Confederate left flank, but Forrest launched an attack from his extreme right and left wings, before the rest of the federal infantry could take the field.
Then, Forrest commanded his artillery to shell the Union line with grapeshot.  The massive damage caused Sturgis to reorder the line in a tighter semicircle around the crossroads, facing east.  Soon, the 2nd Tennessee Cavalry attacked the bridge across the Tishomingo.  This caused confusion among the Federal Troops and Sturgis ordered a retreat.  With the Confederates still pressing, the retreat bottlenecked at the bridge and a panicked rout developed instead.  The chase back to Memphis carried across six counties before the exhausted Confederates retired.
The Confederates suffered 492 casualties to the Union’s 2,240.
Thank you, Keith for sharing with the YHS. Please come again.
Other notes of interest at the March meeting included:
•Mike Worsham welcomed visitors and guests.
• Lawrence Litten voiced a prayer.
• Debby Hughes gave the monthly financial report.
•Pat Brooks mentioned upcoming fundraisers.
• Julia Fernandez announced that the speaker for the April 17, 2014 meeting will be John Nelson, and his topic will be The 27th Infantry, Tallahatchie County.
Attendees included: Emma Hovey, Calvin Schmitz, Debby Hughes, Herb Hayward, Wayne Turner, Cliff Chandler, Sue Chandler, Dave Hovey, Sarah Saucier, John Nelson, Mike Ayers, Mike Worsham, Betty Stewart, Sonny Stewart, Julia Fernandez, James Person, Jerry Harris, Kay McCulley, Carl H. Vick, Carole Martin, Betty Miller, Jimmie Pinnix, Francine Pinnix, Thelma Roberts, Marie Hill, Sue T. Fly, John Basinger, Stelloise Basinger and Pat Brooks.