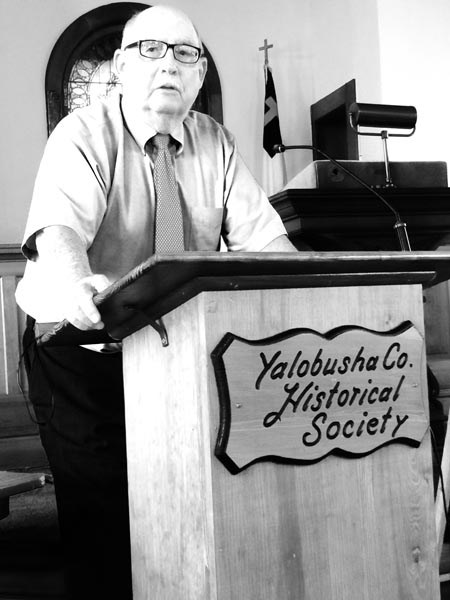 A historic geographical lesson on Mississippi’s boundaries was Oxford’s Ed Sharpe’s topic at the July 17, 2014 Yalobusha Historical Society meeting.
And so it was that the Territory of Mississippi was an organized incorporated territory of the United States that existed from April 7, 1798 until December 10, 1817, when the final extent of the territory was admitted to the Union as the state of Mississippi.
The Mississippi Territory was organized in 1798 from land that had been disputed by the U.S. and Spain until Spain ceded its claim with the treaty of Madrid initially signed between the two countries in 1795.  The state of Georgia maintained a claim over almost the entire area of the present states of Alabama and Mississippi until it surrendered its claim in 1892 following the Yazoo land scandal.  Two years later, Congress extended the boundaries of the Mississippi Territory to include all of the Georgia cession.
In 1812, the United States annexed to the Mississippi Territory the Mobile District of West Florida, claiming that it was included in the Louisiana Purchase, although Spain disputed this and maintained its claim over the area.  In the following year, General James Wilkinson occupied this district with a military force, the Spanish commandant offering no resistance.  This annexation gave to Mississippi territory the coast of the Gulf of Mexico between the Perdido River and the Pearl River (comprising what is now part of Alabama).
On March 3, 1817, the Mississippi Territory was divided, when the western portion became the state of Mississippi, and the eastern became the Alabama territory with St. Stephens, on the Tombigbee River, as the temporary seat of government.
Congress delineated the boundary between Mississippi and Alabama by dividing the territory into approximately equal sized parts, similar in size to Georgia.  The agriculturally productive lands were divided by a straight line running south from the northwest corner of Washington County, Alabama (as it was defined at the time) to the Gulf of Mexico.  The border north of this point was angled eastward in order to keep Mississippi and Alabama roughly equal in size.  At its northern end this angled border follows short section of the Tennessee River.  Congress chose this boundary because if the straight line had been run all the way to the Tennessee border Mississippi would have jurisdiction over a small piece of hilly land cut off from the rest of the state by the wide Tennessee River.
Finally, after much dispute B. A. Ludlow, D. W. Connelly, and W. Petrie representatives from Mississippi met with J. D. Graham and Austin Miller representatives from Tennessee, and they marked a line from a point on the Tennessee River six chains south of the mouth of Yellow Creek to, a point on the Mississippi opposite Cow Island.  Their report was ratified and their line was declared the true Mississippi Tennessee state line in the Mississippi Constitution of 1890.
Thus, Tennessee to the North, Alabama to the East, Gulf of Mexico to the South, and the Mississippi River to the West marks the boundaries of the state of Mississippi. Please come again, Mr. Sharpe.