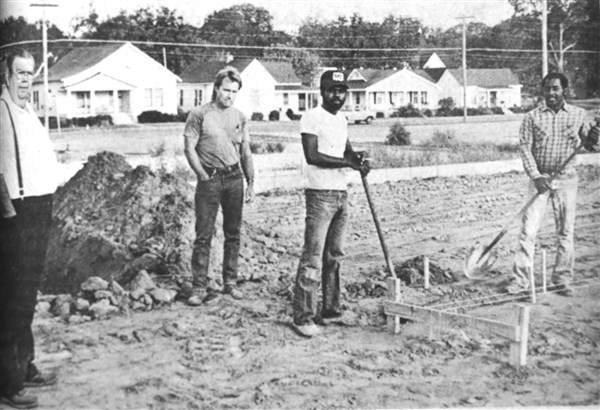 Homecoming Queen Whitney Hodge was crowned by BETA President Chessi Clark in a ceremony before the football games. The queen was escorted by her father, Jeff Hodge.

Mayor Bill Norris and Robert Boxx, director of Outdoor Recreation for Mississippi, inspected the area where improvements are beginning in the Railroad park.

Mr. and Mrs. Baxter Jones have The Garden Club of Water Valley’s “Yard of the Month” for October.

A strong Bruce team defeated the Water Valley Blue Devils in every element of the Friday night game except the scoreboard. The Devils beat the previously unbeaten Trojans by a score of 23-15.

The Water Valley Blue Devils, in an overtime cliff-hanger, defeated the Hernando Tigers, 7-0. Halfback Craig Hawkins made the TD,, and Ken Hart added the PAT. Coaching the team was Terry Allen.

Robert Taliaferro had another “first” when B&I Gin ginned the first bale of cotton of the 1976 crop. Robert is pictured with the 432 pound bale. Ginner Ross Ingram, pictured with Talifaferro, stated that the hand-picked cotton would grade strict middling, which was selling for 81 cents a pound.

Practicing for the upcoming musical presentation  of the “Wizard of Oz” were elementary students, Kathy Potts, Damon Burks, G. G. Mayo, Collie Holloway,  Marjorie Ford, and Jim Shearer, who were part of the cast. The production was directed by Ethel King and Caroline Anderson was the pianist.

The Bruce Trojans soundly defeated the Blue Devils by a score of 48-6.

An alleged arsonist attempted to burn the Bethel Baptist Church during the latter part of last week.

Tony Hardy was pictured with a new style storm shelter, the “Super Bubble,” which was being installed at Hardy’s Garden Plants on Highway 315-E.

First Baptist Church was heavily damaged by fire Tuesday night and within a few hours Shields Shoe Shop was destroyed by fire.

On one side of the front page was a picture of Earl Fly, vice-president of Mechanics Bank, beside a sign stating that “Buck’s suitcase was  packed and he was (under sign was an old suitcase) leaving Town if Bond Issue Fails.”

On the other side of the page was an undefeated sign stating Suratt can stay in town. Buck was chairman of the “Get Out the Vote” Campaign for the Ram Tool Bond Issue and 2400-plus voters approved the BAWI Bond Issue.

The Water Valley Blue Devils soundly defeated the Coldwater Panthers, 47-6, taking over the third spot in the Chickasaw Conference.

The Junior High Devils dropped a hard-fought game, 19-0, to Batesville.

Cadet Luther Fortinberry, son of Mr. and Mrs. Toxey Fortinberry, was promoted to the rank of Cadet Sergeant at Tennessee Military Institute in Sweetwater, Tenn.

Pictured were quarterback Bobby Schmitz and fullback Charles (Buddy) Larson, who will be co-captains in the most crucial game of the 1956 Chickasaw Conference race, as the Blue Devils play Holly Springs Friday night. The local team defeated Hernando in  last week’s game.

The Water Valley Blue Devils and the Holly Springs Tigers and their cheerleaders will be honored by the Valley Theatre at a supper immediately following the game at Holly Springs Friday night. Following the supper there will be a dance for all teenagers in Yalobusha and Marshall counties.

The Oakland Hornets will meet a strong Lula-Rich Team Friday night. They had defeated Lambert in a hard-fought game, 14-7, playing before a large homecoming crowd the previous Friday night.

The Mrs. Water Valley Contest is being held next week.

The Jeff Davis PTA was planing a supper for a study on the PTA Manual.

Three Yalobusha County 4-H members were in Columbus, Ohio at the National Show. Robert Lawshee was exhibiting two animals and Gilda Lynn Jones and Floyd Boyles were exhibiting one animal each. They were accompanied to Columbus by Assistant County Agent Frank Tucker.

George Arrington has been appointed the new game warden for Yalobusha County by the State Game and Fish Commission.

Water Valley’s High School football team, showing a decided improvement over their initial game, defeated Oakland’s team by a score of 44-0, playing on the local field.

Six milk cows have provided Mr. and Mrs. Free an income of $100.80 per month over the past eight months.