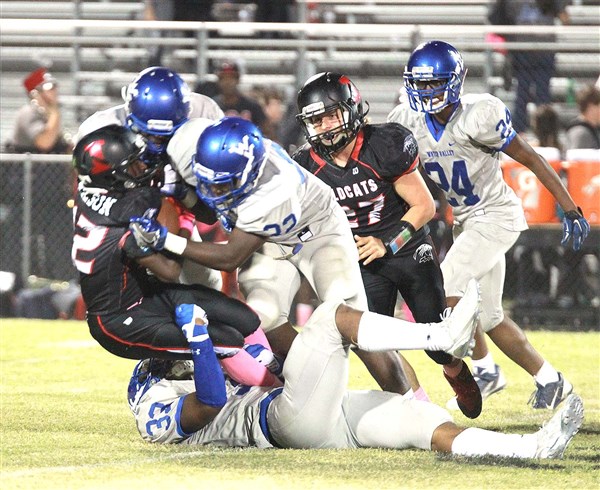 INDEPENDENCE – Looking to stop a five game losing streak, the Blue Devils  came up short against Independence in the second division game of the season. A slow start put the Blue Devils (1-7, 0-2) down 28-0 before the end of the first quarter, a deficient that would prove to be too much to come back from as the Wildcats (5-3, 2-0) earned a 48-20 victory.

The Wildcats got on the board first with a 10 yard touchdown run by senior quarterback Trevonta Newson, to take a 7-0 lead with 7:33 left in the first quarter. The Blue Devils fumbled the ensuing kickoff giving the Wildcats the ball at their own 22 yard line. The Wildcats would take advantage of the turnover, with a one yard touchdown run by Trevonta Newson, extending the Wildcat lead to 14-0. Independence would tack on two more touchdowns to lead 28-0, with a punt return for a touchdown and another touchdown off a kickoff fumble by the Blue Devils during the first quarter.

The Blue Devils got on the board with a 51 yard touchdown run by Taghee James on 4th and 1, the Blue Devils trailed 28-7 with 1:33 left in the first quarter.

Water Valley was able to add another touchdown after recovering an onside kick, scoring  on a long drive that would end with a touchdown pass from quarterback Ty Varner to Jaylin Morgan. The extra point was no good making the score 28-13.

The Wildcats would stop all of the momentum created by the Blue Devils with two touchdowns in the final five minutes of the first half to take a 41-13 lead into the half.

The second half was relatively quiet, with Independence scoring on their first drive of the half and Water Valley scoring on their last possession of the half. The Blue Devils lone touchdown of the second half was a 25 yard touchdown pass from Blayne Clark to Jacob Welch. The Blue Devils first half turnovers put them in an uphill battle that they couldn’t recover from.

Following the loss Coach Embry told the Herald,”We need to grow up quick, or this will continue to happen if we keep giving teams 28-0 starts. They are a really good team, and Coach Richard Russo has done a great job with the program,” Embry added. Russo is a former Blue Devil assistant coach.

The Water Valley team travels to North Panola on Friday for their final regular season road game. The Cougars are (7-1) and (1-1) in the division coming into the contest.