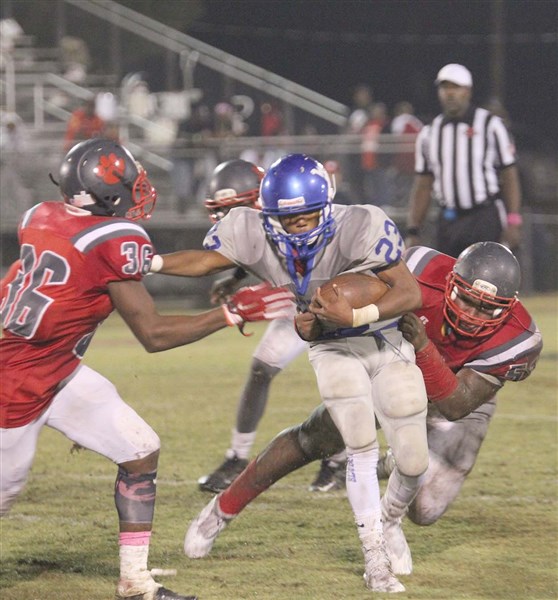 SARDIS – The stands were packed for North Panola’s homecoming game and the field damp from a rain earlier in the day, a perfect setting for a showdown as the Blue Devils (1-8) were looking for an upset to stop their six game losing streak.

The wet field led to several fumbles and dropped passes as the action was intense during the first half of play and Water Valley only trailed 14-7.

The first score of the contest wouldn’t come until midway through the second quarter, when Martavius Rockette scored on an electric, 75-yard touchdown on a punt return to give the Blue Devils a 7-0 lead. The Cougars responded very quickly with a 20 yard touchdown pass and a two point conversion to take an 8-7 lead. North Panola would strike again before halftime with a three yard touchdown run to take a 14-7 lead into the half.

The third quarter went by relatively quickly with neither team being able to put together a scoring drive. However, the fourth quarter had three touchdowns, unfortunately for the Blue Devils they were all for the Cougars. The scoring allowed North Panola to pull away in the end for a 32-7 victory. The loss dropped the Blue Devils to (0-3) in Region 2-3A play.

“I’m extremely proud of them, against an athletic team like North Panola you can’t give up and we didn’t”. The Blue Devils have two division games remaining, both will be played at Bobby Clark Field in Water Valley. They host the Holly Springs Hawks(1-8)(0-3) this Friday night.