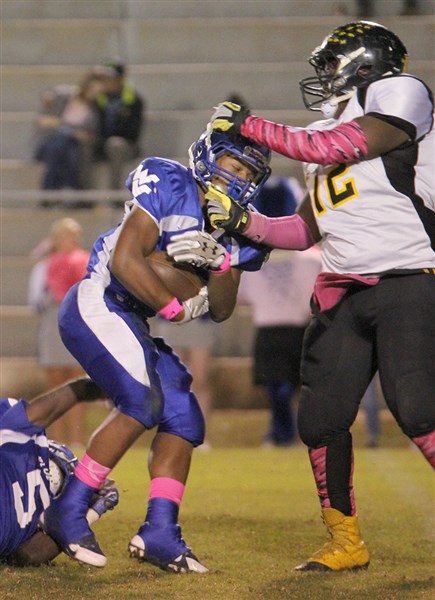 WATER VALLEY – The Blue Devils hosted the Holly Springs Hawks with their postseason hopes on the line last Friday night. In order to make the playoffs, the Blue Devils knew that they would have to win their last two games over Holly Springs  (1-9)(0-4) and M.S Palmer to earn the fourth seed spot in  Region 2-3A.

The Blue Devils (2-8)(1-3)  used a strong defensive performance and just enough offense in the second half to keep their postseason hopes alive, defeating the Holly Springs Hawks 14-6.

The Hawks took the early lead with a defensive touchdown on a 16 yard fumble return. The extra point was no good, giving the Hawks a 6-0 lead in the first quarter. Neither offense could sustain a drive throughout the entire first half, heading to halftime the Blue Devils trailed 6-0 in the must win game.

“Defensively I was really pleased with their effort, Offensively we have to get better inside the 20 yard line,” Coach Brad Embry told reporters. The Blue Devils host the M.S. Palmer Dragons this Friday night at 7 p.m.