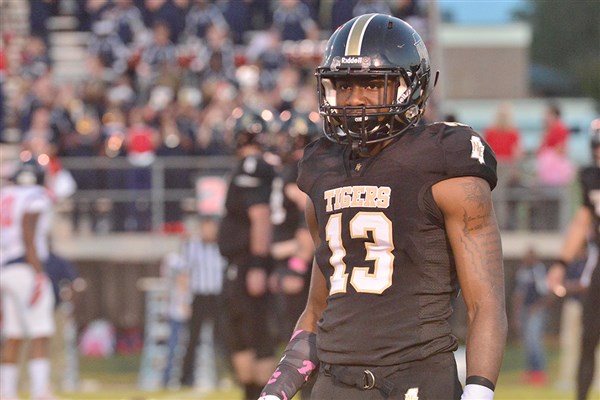 For example, Josh Jarboe accumulated 42 catches for 495 yards with two touchdowns during the 2010 campaign for the Tigers. He went on to sign a NCAA Division I scholarship with Arkansas State University.

Tres Houston came to Northeast one year later and shattered Jarboe’s figures with 45 grabs, 650 yards and eight scores before inking with Arkansas State himself. All three of those figures were the highest recorded marks since 2005.

Donta Armstrong earned National Junior College Athletic Association (NJCAA) All-American honors as a kick returner last season. But the University of West Alabama signee was an accomplished receiver as well with 68 catches over a two-year period.

The Tigers can add a new individual to that list of distinguished wideouts. L.J. Hawkins is currently in the middle of perhaps the best receiving season in school history.

Hawkins has already broken two of Houston’s previous marks through seven games with 51 receptions and 671 yards. He has added a pair of touchdowns to his resume as well.

Both the reception and yardage totals are among the five best in the country and are tops in the talent laden Mississippi Association of Community and Junior Colleges (MACJC).

Hawkins is third nationally in catches and fourth in yards. He is only two receptions behind leader Jarrett Minnutt of Minnesota State Community and Technical College and approximately 200 yards shy of Jacob Clair from Dakota (N.D.) College at Bottineau.

The Water Valley High School graduate showed signs of promise during his freshman year, especially near the end of the campaign. He tallied season-highs of six catches, 77 yards and three touchdowns in Northeast’s week eight win at Pearl River Community College.

Hawkins also snagged a touchdown on a 21-yard pass from current Jacksonville State (Ala.) University quarterback Kendrick Doss during his first-ever game with the Tigers against Mississippi Gulf Coast Community College.

He wrapped up his inaugural year in the City of Hospitality with 18 catches, which was tied with Joe Horn, Jr., for third most on the squad. Hawkins added 225 yards and four touchdowns as well.

But Hawkins has blossomed during his sophomore campaign. He is one of the main contributors for an offense that posts 29.3 points per game, which is on pace to be the second highest average in program history.

Northeast head coach Greg Davis notes that there’s more than just the phenomenal numbers to his top wideout. He notes that Hawkins is an exceptional example for his teammates and a tireless laborer.

“L.J. is a leader in a lot of different ways,” Davis said. “We knew he could be special. He had that little bit of edge to him. He’s a kid that you could build a program around. We’re extremely happy with him. We’ve just got to keep feeding him the ball because he’s a playmaker.”

The man delivering passes to Hawkins is freshman quarterback Mason Cunningham, who is having a stellar season himself with 1,538 yards through the air with 10 touchdowns.

Hawkins believes that his solid association with Cunningham begins on the practice field adjacent to Tiger Stadium during the weekly prep that leads up to each Thursday evening.

“It’s a great connection,” said Hawkins. “In practice, repetition is very important and we go back-and-forth with each other on what we should do and what we should change. We then carry that over to the games.”

Hawkins has had a team-high in receptions in all but one of the seven games that Northeast has played so far. He opened the campaign with five grabs, 49 yards and a touchdown versus Pearl River.

The 6-0, 195-pounder had an incredible performance at East Central Community College one week later with a career-high 12 catches for 133 yards to help the Tigers capture a last-second win.

He had back-to-back 100-yard outings during Northeast’s victories against Southwest Mississippi Community College and Coahoma Community College, including a personal best 166 yards during the homecoming matchup with the visiting Tigers.

Hawkins recorded his fourth 100-yard game of the year on eight receptions during the Tigers’ most recent matchup at Mississippi Delta Community College one week ago.

He does not have less than five catches or 40 yards in any contest this season. Hawkins averages 95.9 yards per game, which is fourth in the country, and 13.2 yards each catch.

Hawkins certainly has a future on the gridiron once his superlative tenure on the Booneville campus comes to a close. There are several institutions that have already given him scholarship opportunities.

The University of Minnesota is also looking at Hawkins. With a career stat line that includes 69 receptions, 896 yards and six touchdowns, expect more schools to jump on the Hawkins bandwagon.

Hawkins is one of 25 sophomores that played their final home game tonight against Holmes Community College on October 20. It is a bittersweet moment knowing his time with the Tigers will soon come to a close, but more big moments lie just around the corner.

Although the regular season is wrapping up, Hawkins’ message to his fellow upperclassmen is to keep the attention on the immediate tasks at hand and to not look into the future.

“Just stay focused and continue to make this season a memorable one,” said Hawkins.

One could say that mission has already been accomplished by the Tigers. Northeast was 1-6 this time last year and now stands at 6-1, including a 3-1 ledger in the MACJC North Division.

It is tied for the best start this decade for the Tigers, who were also 6-1 in 2011. Northeast has also risen to No. 7 in the NJCAA’s latest poll, which is the highest ranking since 2005.

The quick turnaround can be credited directly to Hawkins and his fellow sophomores, who started pressing towards that goal last November after the 2015 season ended.

“I think we’re just all on the same page,” Hawkins said. “We all had the same mindset to work hard and change things.”