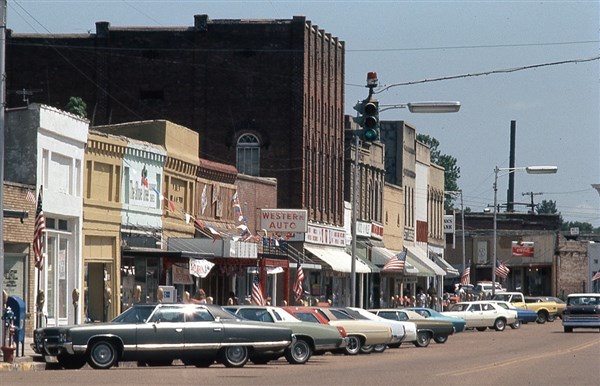 A casual observation backed by MDOT”s traffic count indicates that the gold old days, in terms of Main Street traffic, are back. This photo from 1976 shows plenty of activity at Water Valley’s businesses.

It was a lazy mistake, compounded by a deadline, aided by a faulty memory, and a little arrogance. Arrogance in that I think I can remember all automobiles details, faulty memory in that the event was 36 years ago, and deadline as in past the deadline for this newspaper. What I got wrong in last week’s column was I said the Blues Brothers drove an “old Plymouth.”

Wrong. It was a 1974 Dodge Monaco, and in light of the film being from 1980, not such an old car after all. Facts, they’re just stubborn things. Details, too. Got to be correct as well.

I have the feeling that traffic has increased on Water Valley’s Main Street. Not just during the week workdays, but in general. Here’s my seat of the pants examples. Last Monday evening, leaving the Main Street office just before 7 p.m. (not implying I work late all the time) it took some time to back out of the parking space on to Main because there was traffic. Eleven cars in a row before I got a break. It was dark, so not sure if they were all talking on the phones, but regardless, a decade ago I could have backed up without looking and not have had to worry. No traffic at all then at that time of day on a Monday.

And it was a decade ago, especially on a Monday, where nearly no cars were parked on the Railroad Park side of Main. Not the case anymore. Parkside is parked up. Monday lunch at the BTC had all tables full. The end of the week the BTC has been busy for a while, being busy on a Monday is now new.

Even Sunday there’s more than morning church traffic. I was working downtown at Bozarts on Sunday afternoon when the gallery was not open. Had the front door unlocked and a dozen people in an hour’s time walked in – thought maybe ought to be open. Rocky Mountain Chocolate on Main Street is open Sunday afternoon. Art and sweets. Could work.

And I ask myself, in light of me mistaking a Dodge for a Plymouth, could my memory be failing? Was there less traffic a decade ago or am I just getting old and can’t remember?

Lucky for me there’s MDOT to the rescue. You might think Mississippi is behind the times, and you’d often be right. If the truth be told, we halfway like it like that. But your often mis-appropriated state tax dollars are going to use properly with the Mississippi Department of Transpor-tation. Or at least their website. Check it out by going to www.gomdot.com and looking under the link for “traffic volume.”

You can search the whole state and see all the data from MDOT traffic counters from the last decade. There are two locations right down-town on Main Street, check the ones at Wagner Street and the other just north of Martin Street. In 2005 the average traffic was 6,200 cars per day. Last year the average was up to 7,600 cars per day. Now somebody commented once how do I know it ain’t the same 76 idiots driving around a 100 times a day?

Easy, we don’t have that many – not sure what the official WV idiot count is, but less than 76. That’s not counting the county. So it is a fact that at least more folks are driving Main Street. And the detail that’s important is maybe more are stopping and shopping, too.