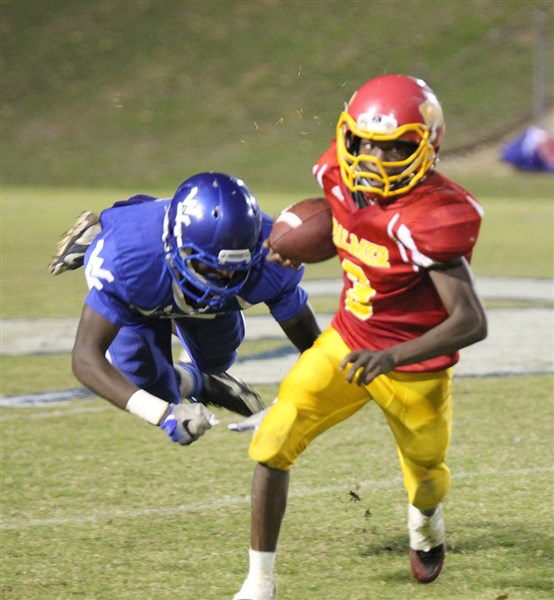 Jalin Morgan gets airborne as he closes in for the tackle in the final game of the season. – Photo by Leslie Brooks

WATER VALLEY  – The Water Valley Blue Devils hosted the M.S Palmer Dragons last Friday night, with a spot in the MHSAA Playoffs on the line. The Dragons got off to a hot start and never looked back, defeating the Blue Devils 58-21. The Blue Devils (2-9, 1-4)  had five turnovers in the first quarter, allowing the Dragons to get an early 24-0 lead in the contest.

M.S Palmer (6-5, 2-3)  quarterback Sidney Washington connected with Markee Cook on back to back possessions to take a quick 16-0 lead over the Blue Devils. The second touchdown pass was bobbled by two Blue Devil defenders before finding Markee Cook for his second touchdown. Following a Blue Devil fumble,  Washington connected with Curtis Williams for his third passing touchdown of the night to give his team a 24-0 lead midway through the first quarter.

The second half was all Dragons as the team scored three more Touchdowns to extend their lead out to 58-14. Water Valley would score one final touchdown late in the 4th quarter, on a one yard touchdown run by Clark for his second score of the night. The final score would be 58-21 and the Dragon victory  earned the team a fourth seed spot in the playoffs.

“We had 5 turnover in the first quarter and you can’t win when you do that,” Coach Embry said following the loss. The Blue Devils finished the 2016 Campaign with a 2-9 overall record and a 1-4 region 2-3A record.

Jalin Morgan gets airborne as he closes in for the tackle in the final game of the season.