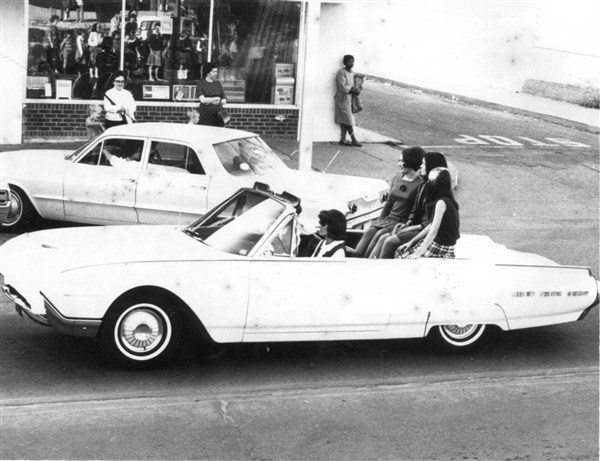 Riding down Main Street during the Homecoming Parade in 1966 were members of the homecoming court for 1966-67, Grace A. McMinn (Hardy), Mary K. Potts (Mooney)and Linda Winters (Maynor). Their chariot was a yellow Thunderbird, owned by Lettie Redwine Blackwood, sister of the original owner, the late “Sonny” Redwine.

10 Years – November 3, 2006 – In the first round of play-offs Valley was scheduled to face Nettleton on the road. They had ended regular season play with a 6-4 overall and a 4-2 division standing.  The Blue Devils lost their final game of the regular season, 15-12, to West Bolivar at Rosedale.

While election procedures across the state and nation had encountered numerous problems with new systems, the system chosen by Yalobusha County Board of Supervisor s and Circuit Clerk Daryl Burney worked perfectly. Poll workers had tabulated the votes and gone home only an hour and a half after the polls closed. Seventy-seven of the 82 counties in Mississippi had elected to go with the new Diebold system, which had numerous problems.

20 Years—November 7, 1996 –  Winners in the Halloween Costume Contest, sponsored by Steele Manufacturing for its employees were: Barbara Russell, scariest; Rose Russell, most creative; and James Griffin, cutest.

Gov. Kirk Fordice is reported “Lucky to be alive”, according to witnesses of a wreck on I-55, not far south of the Yalobusha County line. He was alone in his Jeep, headed south, when his vehicle veered off the highway, hit several obstructions, then rolled more than twice, and caught fire. He was reported to be in serious condition.

Gurner Photographer provided five cute Halloween pictures. They were: Devin Green, 7-months-old, as a pumpkin; 4-year-old Hunter Edwards as a pirate; 7-year-old Margaret Black as a fifties girl; 2-year-old Brittany Bolton as a cheerleader; Zachary Melton, 11-months-old, as a clown; and Matthew Wilbourn, also dressed as a clown.

30 Years—November 6, 1986 – The Blue Devils have been invited to play in the Sweet Potato Bowl in Varda-man on November 13. Their opponent will be Nettleton.

The Blue Devils defeated the Coldwater Panthers, 21-10, to clinch a bowl birth.

Lloyd White’s home was chosen as The Garden Club of Water Valley’s “Yard of the Month” for November.

The reunion of Squire Richard Hill, Sr.’s family will be held at the home of Mr. and Mrs. Dale Johnson.

40 Years—November 4, 1976 – Binnie Turnage, Blue Devils’ statistician for nearly 20 years, was at his post on the sidelines at the game Friday night—a miserable cold and raining night, when this Herald photographer made his picture.

The Blue Devils lost this slippery wet football game to Charleston, closing the 1976 season. The Devils only win of the ’76 Season was over cross-county rivals, the Coffeeville Pirates.

Guided tours are being offered at the new Water Valley High School nature trail. The focal point of this trail is an almost authentic log cabin, build from “The Little Peabody,” owned by Bluford McCullar and moved from his farm in Panola County to the trail’s head, near the high school.

50 Years—November 3, 1966 – Don Holloway, Fred Kendrick, and Rev. J. W. Carroll of Tupelo, vice-chairman of the North Mississippi Methodist Conference, were pictured examining the 1897 cornerstone of the Methodist Childrens’ Home, which was located in Water Valley until it was moved to Jackson in 1906.

The Jeff Davis Water Association was making final plans for the operation of the system.

Betty Van Winkle was a member of the Northwest Junior College’s Homecom-ing Court.

60 Years—November 8, 1956 – Yalobusha County 4-H girls, Lily Ruth Shoemake, Billie Faye Hall and Patsy Redwine, were winners at the State Fair in the 4-H Division of the Clothing and Dress Revue.

Inducted into the Armed Forces were William Hervey Cook and Edgar Lee Stark of Water Valley, Hugh Hunt of Oakland, and Clarence York of Coffeeville.

70–Years—November 7, 1946 – Dr. Ben Evans, a young doctor, has returned to Water Valley and will practice medicine and surgery here. His parents lived in Water Valley while his father was chief clerk for the Illinois Central Railroad, and then moved the family to Fulton, Kentucky.

In a sale at Senatobia, Elbert Sides of Coffeeville sold one of his prize winning beef calves for 28 cents a pound.

Mississippians mourn the loss of Gov. Thomas L. Bailey. Fielding Wright is his successor. Fifty-eight years old, he was the state’s 48th governor and the third to die in office.

The local PTA will observe Education Week and released a number of long-term goals they hope to see accomplished. Top of the list was adequate salaries for teachers.