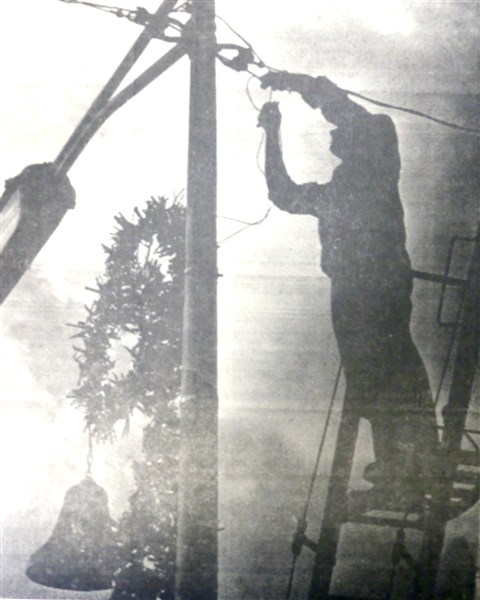 The Christmas decorations were going up just before Thanksgiving in 1966 as city lineman Arthur Nolen wired one of the displays.

It was decided in the Yalobusha County Supervisor’s meeting that Yalobusha General Hospital would continue answering 911 medical emergency calls.

Announcement was made that Mr. and Mrs. Paul Parker have been named grand marshals of the Water Valley Christmas parade.

The Community Thanksgiving Service was held in the sanctuary of First Baptist Church. Rev. Bill Lott, pastor of First United Methodist Church, was the speaker for the service, which is an annual event sponsored by the Water Valley Ministerial Association.

The Junior Auxiliary is sponsoring a program to finger print children of the area. JA is also requesting help with getting toys for needy local children.

The local Jaycees will distribute food baskets to needy families during the holiday season. Many area citizens are donating to this cause.

40 Years—November 25, 1976 – Sonny Lollar, president of the Bondafoam Company, reported that the plant was expected to be back in operation on Tuesday after fire had caused considerable damage at the plant last Thursday.

Danny Ross Ingram  was elected vice-president of the Cattle Improvement Group of Mississippi.

Lamar Burgess was among 40 students at Alcorn State University included in the latest edition of Who’s Who Among Students in American Universities and Colleges.

Autumn Cooke and Betty Porter of Coffeeville were pictured surrounded by stuffed dolls, rabbits, and dogs, items to be sold at the annual Christmas Bazaar at Yalobusha Academy.

50 Years—November 24, 1966 – Hubert Sanders received a 15-star service pin and Gaylon King was given a five-year service pin at the Big Yank Awards Dinner.

AML Corporation has moved to Water Valley and started operations in the east side of the old grammar school. The company manufactures janitorial detergent and employees about 15 people.

Cleve Peacock was pictured with a nice eight point buck, killed only minutes after the season opened. He stated that it was his first successful deer hunt since 1945.

Hunting in the Holly Springs National Forest, Stanley True and “Butch” Vaughn killed two bucks about a 100 yards  apart  and within 30 minutes of the each other. One was a six-point buck and the other a spike.

Several units have been added to both Housing Authority Projects.

Miles Pastry Shop, which was heavily damaged in an October fire on Main Street, has been redecorated and is now reopened. Shields Shoe Shop, completely destroyed in the fire, has been rebuilt and is again open for business.

Members  of the Pee Wee team were also recognized at the banquet. They were: Larry Swearengen, captain; Eddie Ray and Jimmy Miles, co-captains, and their coach, Bobby Tyler.

The Water Valley High School basketball team suffered their first loss of the season to a strong Bruce team.

Shirley Fair, daughter of Mr. and Mrs. J. A. Fair, has been named associate editor of The Spectator, student newspaper at Mississippi College for Women (MSCW).

A suspension of flood control  operations in the lower Mississippi Valley has been rescinded by President Harry Truman’s release of $56,000,000 of impounded flood control funds.