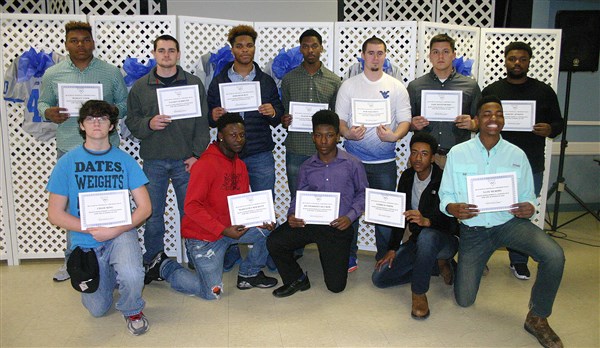 A dozen Blue Devils earned perfect attendance awards for their participation in the weight room last summer as they prepared for the upcoming season. The minimum attendance to receive the certificate was 21 workouts. The group and their number of workouts included (front row, from left) Chase King (21), Martavius Rockett (26), Kenterrious Rucker (25), Cedrick White (22) and Nate Murphy (22); (back row, from left) Marley Cook (23), Payden Surrette (21), Jeremiah Ray (21), Isaiah White (21), Rob Mitchell (22), Jake Rotenberry (22) and Jeremy Jenkins (22). Not pictured is Blayne Clark (22). See more pictures of awards in this weeks issue of the North Mississippi Herald.

WATER VALLEY – While this year’s football athletic awards banquet held Feb. 9 was obviously about honoring individual players for their achievements during the 2016, Coach Brad Embry had strong words for the entire team.

Smith told the team he readily accepted the offer to speak at the banquet when Embry first approached him.

“I said right away, coach we have something in common, because Ole Miss had a difficult season too,” Smith told the young players before sharing his testimony.

Smith told the group that he moved to Oxford from his lifelong home state of Florida last year when he took a job with Ole Miss.

“I saw it as an opportunity to take me out of my comfort zone, to move me to a state that I didn’t know anything about,” Smith said about his initial interest in the job.

Even when he first visited the Ole Miss campus, Smith said he was undecided about moving his family to Mississippi. That changed when he saw allegations last year during draft day involving former Ole Miss players’ conduct.

“God spoke to me at that moment and said that is why I want you here,” Smith said.

Smith shared the highlights of his football career, starting in Apopka, Fla., where he was a standout 230-pound running back with sprinter’s speed. His talents earned him a scholarship to play at Florida State from 1985-89 where he set school records.

His success continued at the next level, playing four NFL seasons from 1989 to 1992 for the Dolphins and Denver Broncos..

Smith also shared the lows, including losing a child and serving seven years in federal prison after he was convicted on drug charges.

During his first night in jail Smith said he trusted Jesus to forgive him, and surrendered his lift to Christ.

“My life changed,” Smith said. After serving his time, Smith said he got out of jail and “doors just opened” as he shared his love for Christ, a passion that led him to Ole Miss last year.

It’s a journey that will be over before you know it,” Smith said about football, as he encouraged the players to be great men of God.

“Leadership is not easy, everything he does is 110 MPH and I am not just talking athletics,” Embry said about Dunn, adding his dedication is extended to school work, school clubs and academics.  “Sam Dunn does things right, all the time. None of us are perfect, but he does things right. He has shown you guys the way,” Embry added.

Embry also had praise for Surrette.

“He signed up to go to Parris Island in a few months. This man is serious. I have the upmost respect for him,” Embry said. He added that Surrette played left tackle, defensive end, just about every special team position, running up and down the field wide open all year long.

“I had to call a recruiter and tell him to quit running Payden 10 miles on the weekend during the season,” Embry added. Other honors handed out at the banquet, held at the First Baptist Church are included in photos accompanying this article.