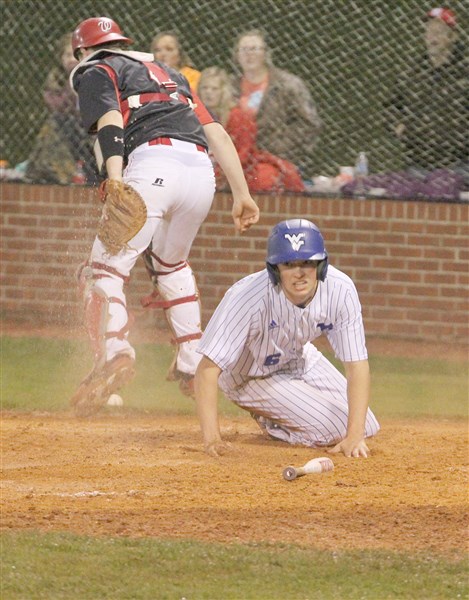 Chapel Hyde crossed the plate for a run against Winona last week.

WATER VALLEY – A Blue Devils offensive outburst that put nine runs on the scoreboard  in the March 7 contest against Winona Tigers (3-4) was not enough for a win as the Tigers scored 12 runs.

Water Valley was able to close the gap in the 5th and 6th innings, as they kept the Tigers offense quiet and scored four runs to tie the game at 9 heading into the last inning.

Winona responded with three  runs in the top of the 7th inning and held the Blue Devils off of the board in the bottom of the 7th to hold on for the 12-9 win.

Despite the loss, the Blue Devils had impressive offensive performances from several players. Junior Gavin Darby led the team with three hits in the game. Dre McCray led the team with 3 RBIs on an inside the park homerun. Blayne Clark, Ty Kuykendall, and Chapel Hyde each added one hit for the Blue Devils. Water Valley also had several players finish the game with one RBI including Ty Kuykendall, Gavin Darby, Ty Varner, Chapel Hyde, Martavis Rockette, and Grant Burress.

Water Valley will be looking to build off of their offensive outburst when they take part in a spring break tournament at Oxford High School. The Blue Devils will face off against the Lake Cormorant Gators and Houston Hilltoppers on Tuesday. On Wednesday, they will face the Oxford Chargers in their final game of the tournament.