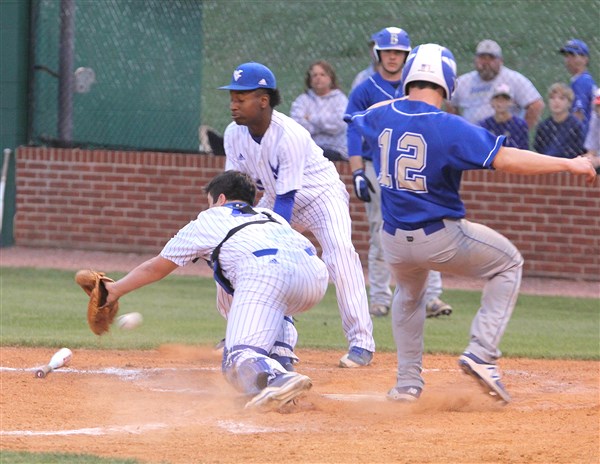 Blue Devil catcher Ty Varner and pitcher Dre McCray lunge for the ball at home plate as a Bruce base runner scores last Friday. The varsity team was defeated by Bruce on March 21, but picked up a win against the rival on March 24. 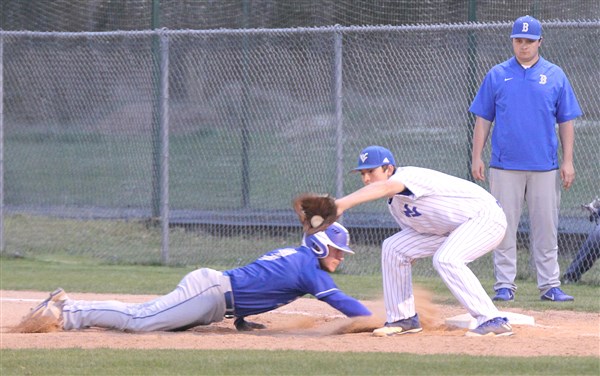 Chapel Hyde stretches to get back to first to avoid a pick off in Friday’s varsity game against Bruce.

BRUCE – The Water Valley Blue Devils (4-9) traveled to Bruce on March 21 to take on the Bruce Trojans in a non-division contest.

The Water Valley team was unable to keep up with the Trojans offensive explosion, as they were defeated 13-5 by the Trojans. The loss dropped the Blue Devils to (2-9) on the season.

The Blue Devils were able to keep up the momentum when they faced Bruce again on Friday. Playing at home, the Blue Devils kept the Trojans quiet and sparked enough offense to earn the 5-1 victory.

The win improved the Blue Devils to (4-9) on the season. Water Valley will be back in action on March 31 as they host the Independence Wildcats for a division matchup.