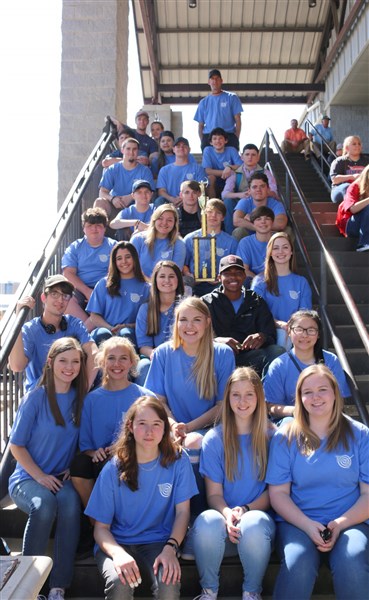 The Water Valley archery team poses with their second place trophy Monday after shooting a new school record in the State Championship AIMS (Archery In Mississippi Schools) tournament in Jackson. Thirty team members shot in the tournament and the score is calculated by taking the top four male scores, the top four female scores and the next four highest scores, regardless of gender.

JACKSON – The Blue Devils’ archery team scored another school record with 3,301 points during the 2017 AIMS (Archery in Mississippi School) State Championship in Jackson Monday, securing a second place finish statewide in the 3A category.

“We shot our highest school record, we broke 3,300,” an ecstatic Steve Lindsey reported as the team was headed back to the Valley Monday afternoon. Lindsey is the coach for the archery team and is extremely proud of the competitors, as this is only the second year the sport has been added to the lineup at Water Valley High School.

The team score is calculated by taking the four highest boys’ scores, the four highest girls’ scores and the next four highest scores, regardless of gender. Monday’s score of 3,301 means the top 12 shooters averaged just over 275 points out of a perfect 300 score.

“275 average, that is just crazy good,” Lindsey said about his team’s performance. “We just got it done today.”

Lindsey credited the entire team effort for the success.

“We are pulling from the pool. It’s incredible, somebody stepped up every time,” Lindsey explained.

The second place statewide finish placed the school ahead of Hatley, who beat Water Valley in the North State Qualifier in Coffeeville last month.

“We came back and beat them,” Lindsey reported.

The second place finish only had Water Valley trailing South Pontotoc by 16 points, which is also a feat – South Pontotoc has consistently set the benchmark as the team to beat with their long-established archery program.

Water Valley added archery as a sport last year, joining almost 500 schools in 50 counties with more than 70,000 students participating each year. The growth of AIMS in Mississippi follows the national trend of archery being the fastest growing sport across the nation.

For Lindsey, the most remarkable thing about the season was the continued improvement.

“We have talked at length about how much better this group of kids gets with every shoot. I think this is a combination of a lot of little things, little competitions going on in the group, kids that want to shoot a personal best and team pride,” Lindsey explained. “And we have a really good group of coachable kids,” the coach added.

“My goals were, before the season, to start out around where we finished last year,” Lindsey explained. 3099 was highest score last year and this year’s team scored higher than that in the first match.

Scoring 3,250 points was Lindsey’s second goal, a feat that was reached last month during the North State Qualifier.

“My dream goal was to break 3,300 points. We ended up doing that at state,” Lindsey added.

The 30 team scores include: