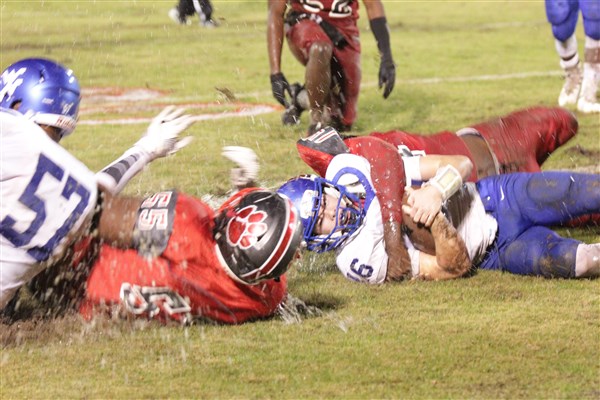 Playing on an extremely wet field, Jacob Truss led the Blue Devils’ offensive attack, finishing with 275 total yards of offense and four touchdowns, three though the air and one on the ground.

SARDIS – The Water Valley Blue Devils (13-2) traveled to Sardis to take on the North Panola Cougars (12-2) in a widely anticipated rematch of the Region 2-3A Championship. This time there was even more on the line with a spot in the 3A State Championship awaiting the winner.

Water Valley looked to flush the memories of their 52-19 loss to North Panola from four weeks prior, and come and battle for four full quarters and did just that en route to a 43-28 victory over an impressive North Panola squad.

Water Valley outscored the Cougars 33-16 in the second half after trailing 12-10 at the half, a complete reversal from the first matchup in which the Blue Devils were shutout in the second half and gave up 33 points to KJ Jefferson and the North Panola offense.

“(North Panola) is a great football team and it was back and forth, with them getting us once and this time we got them,” Head Coach Brad Embry said. “I’m so proud of the guys.”

Jacob Truss led the Blue Devils’ offensive attack, finishing with 275 total yards of offense and four touchdowns, three though the air and one on the ground.

Martavius Rockett had a special performance for the Blue Devils in the second half, one that was necessary in order to pull off the big win. Rockett scored on two explosive plays for Water Valley that helped shift the momentum their way, one being a 53 yard touchdown reception and the other a 43 yard touchdown run on a double reverse that caught the Cougars by surprise.

The Water Valley defense faced their toughest test of the playoffs with KJ Jefferson and the potent Cougar offense. The Blue Devils gave up a couple of big plays to Jefferson, but performed very well against the North Panola rushing attack that hurt them in the first matchup. Water Valley held North Panola to 88 yards rushing.

Water Valley now turns their attention to the 3A State Championship in Hattiesburg this Friday at 11 a.m., their first State title appearance since winning it all in 1990. The Blue Devils will face off against the Seminary Bulldogs (12-3) at  M.M. Roberts Stadium, home of the Southern Miss Golden Eagles.

Water Valley and Seminary have one common opponent from this season, Winona. The Blue Devils lost a tough one to Winona earlier this season, falling 21-20 in a game where Water Valley had seven turnovers. Seminary defeated Winona in the third round of the playoffs in a 46-41 shootout.

Water Valley will have to get past the No. 2 recruit in the 2019 Class in Mississippi if they want to bring home the gold ball. Mississippi State commit, Nathan Pickering, has had colleges from all over the country visiting Seminary this season. It will be the second week in a row that the Blue Devils will take on a SEC commit (KJ Jefferson and Nathan Pickering).

The Blue Devils defense that has been strong against the run all season will face a Seminary rushing attack that averages 308 yards per game on the ground.