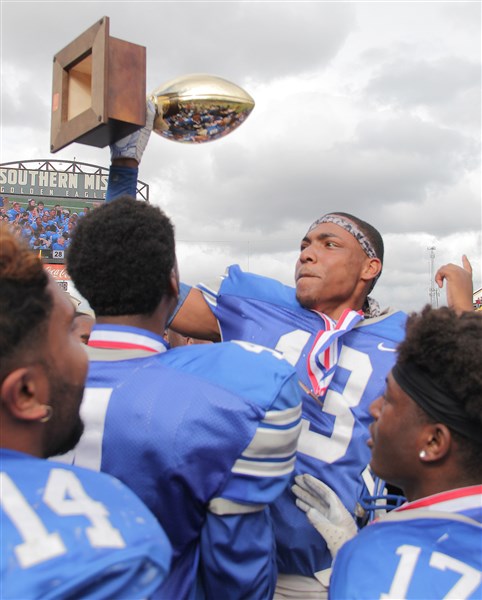 Nate Murphy holds up the trophy as the team celebrates.

HATTIESBURG – The Water Valley Blue Devils were the last team standing in 3A after earning a 34-28 victory against the Seminary Bulldogs to claim the state champinship. The Blue Devils came out firing on all cylinders and hung on late for the win that ended a 28-year championship drought.

“This school and community has put a lot into this, between effort, money and just support in general,” Head Coach Brad Embry said. “I’m just excited to be a part of it… that was a team win”.

Jacob Truss and Bud Tolbert led the offensive attack in the big victory. Tolbert finished the day with four catches for 100 yards and four touchdowns. and was  named the C Spire MVP of the Game.

“Bud has that capability, when we give him opportunities he’s there, he makes plays,” Coach Embry said about the MVP’s effort.

Water Valley got on the board first as Truss found Tolbert on a 24-yard touchdown strike, giving the Blue Devils an early 7-0 lead with 5:04 left in the opening quarter. The Blue Devils would extend the lead early in the second quarter with a trick play that garnered national attention in February after the Eagles ran it in their Super Bowl victory over the Patriots, a play that is widely know as the “Philly Special.”

Truss took the snap and handed it to Rucker, who came around the edge and tossed it to Martavius Rockett, Rockett then threw it to a wide open Truss in the back of the endzone, putting Water Valley up 14-0.

Seminary answered with a three-yard rushing touchdown from Jordan Barrett to close the deficit to 14-6 midway through the second quarter. After the offenses traded punts on the next couple possessions, the Blue Devils closed the half out with a bang as Truss connected with Tolbert on a 35-yard touchdown strike, extending the lead to 21-6.

Water Valley wouldn’t stop there, coming out and scoring in less than 2 minutes to start the second half when Truss found  Tolbert again on yet another 35 yard touchdown to give the Blue Devils a 28-6 lead.

The dynamic pair, Truss and Tolbert, connected again on the following possession in what would prove to be the game winning touchdown. Their fourth and final connection was a six-yard strike with 2:20 left in the third quarter to put Water Valley up 34-12.

However Seminary wouldn’t quit scoring 16 straight points during the final 14 minutes to set up a crucial onside kick with just under two minutes remaining in the contest and the Blue Devils nursing a 34-28 lead. Water Valley recovered the onside kick and Truss would put the game away with a hard-earned seven-yard gain on third and five to setup a couple of victory formation kneels before seeing the clock hit all 0’s.

“He (Nate Murphy) played great, making a lot of tackles, and he’s done that all year,” Coach Embry said.