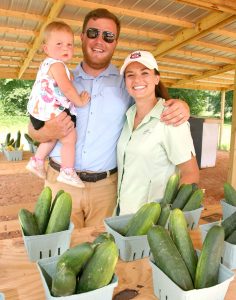 Fresh produce at Jones Family Farm is available at their produce stand on Hwy. 32, just west of Water Valley. The farm is operated by Rob and Jordan Jones, with a little help from Reagan Jones.

WATER VALLEY – It has only been a year since Rob and Jordan Jones purchased a 30-acre tract just west of town on Hwy. 32, but they are already deeply invested in their passion to launch a produce business. Eighteen acres are in production – rows and rows of fruit and vegetables that include cucumbers, yellow squash, zucchini squash, sweet corn, purple hull peas, butter beans, green beans, peppers, watermelons, cantaloupes, okra and other summer delights.

The couple saved every dollar possible during Rob’s five-year service in the Marines, carefully planning for their next chapter in life. Rob is juggling the labor-intensive operation with his enrollment at the University of Mississippi as he pursues a business degree to help boost his management skills with hopes of growing the produce farm to supply food to a broad market that could include grocers.

The current operation includes selling produce at farmers markets in the area and from a new produce stand erected on the corner of their property at the intersection of County Road 104 and Hwy. 32. Rob reports that providing fresh produce and strong service is vital to building a loyal customer base.

“You can come to our produce stand and look across the field and see where your food is coming from,” Rob explains.

Although the heavy rain earlier in the year hampered much of the production for their early spring crops, they have cucumbers, squash and zucchini available and within a week or two the first tomatoes will be ripe. Their produce stand is open from 2 to 6 p.m., Monday to Friday.

Rob believes that this opportunity has already been blessed, starting with finding the prime bottomland fields to purchase, located adjacent to a highway where they can work, live and peddle their produce.  The outpouring of support from neighbors, new friends and their church family at Sylva Rena Baptist Church has also been instrumental in making this dream a reality. And Rob’s time in the Marines also provided inspiration for the hard work toiling in the sun.

“I have been a lot of places and seen a lot of people who don’t have the opportunities that we have, both in other countries and here at home in the U.S.” Rob explains.

His family including parents Keith and Cynthia Jones and siblings Adam Jones and Anna Jones have pitched in to help. His mother often helps with the logistics, and his father with the details that accompany a business. Anna has helped with sales at farmers markets and Keith has helped with the hard work in the fields.

He also explains that friends like Travis Brooks, Kyle Jeffreys, Mike Williamson and others have also shared valuable agriculture knowledge to help him get started..

“I give a lot of credit to Travis, he has really helped me out,” Rob explains.

Jeffreys serves as the county’s ARN agent with the Mississippi State Extension Service and has provided assistance helping determine which plant varieties to grow along with proper fertilizer application.

“It’s a lot of hard work,” Jeffreys explains, referring to growing and selling produce. He noted that there are only a handful of produce farmers in the county, including a similar operation by his parents and Burney Farms commercial watermelon acreage.

Jeffreys also cited the wet spring as a challenge, both for commercial growers and local gardeners.

“The problem with the spring we had, you couldn’t get in and get your ground worked when you needed to,” Jeffreys explained. This meant seedlings that needed to go in the ground were often delayed.  Tomatoes have suffered as many of the plants were put in the ground when it was extremely wet, followed by hot, dry weather that has caused problems.

For Rob, some of these challenges meant working late at night during the brief periods between rains when the ground was dry enough to work.

“We used the lights on the tractors, at times we were out there in the middle of the night,” he explained. “But I think we are going to have a good year, the Lord has really blessed us,” Rob adds.