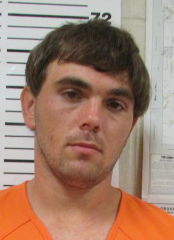 OAKLAND – An Oakland man has been charged with commercial burglary and grand larceny for his alleged role in a break-in at Kathy’s Quick Stop last Wednesday, June 5.

Sheriff Lance Humphreys reported William Steven Jackson was arrested on June 7 after a witness provided information to narcotics investigator Thomas West and deputy Jason Mangrum. Jackson was picked up at his residence and consented to a search of his room where items were recovered that matched the description of missing inventory from the store.  Jackson was transported to the Yalobusha County Detention Center.

“During an interview at the jail, he provided additional information about the crime to West, including where more stolen items were hidden,” Humphreys reported. A security camera and mask allegedly worn during the break-in were recovered from a wooded area near the store, which is located on Hwy. 51 in Tillatoba.

Jackson was already out on bond for burglary and grand larceny from a crime back in February where he allegedly broke into a home near Oakland and stole multiple items including a gun and four-wheeler. Deputies were able to recover those items and arrest Jackson the following day.