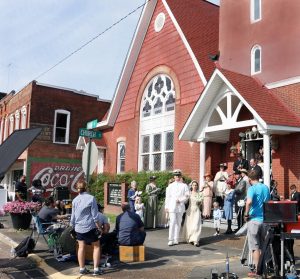 The cameras were rolling Tuesday morning as a crew filmed “The Past Is Never Dead, The Story of William Faulkner,” the first authorized documentary about Nobel Prize winning author William Faulkner. This scene on the steps of the Presbyterian Church portrays the 1919 wedding of Faulkner’s childhood sweetheart, Estelle Oldham, to her first husband. Ten years later and less than two months after her divorce, Oldham married Faulkner.

WATER VALLEY – Camera crews were rolling Tuesday in Water Valley as work continues on the production of a new documentary exploring the life of one of America’s best authors, William Faulkner. “The Past is Never Dead: The Story of William Faulkner” is a combination of reenactment, archival and interview footage to portray Faulkner’s story of love, rejection, heartache and perseverance, according to Yoknapatawpha Productions.

Footage includes reenactments at Rowan Oak in Oxford as well as other locations in the author’s hometown in what is described as the first documentary ever authorized by the Faulkner estate.

In Water Valley, the crew spent Tuesday filming two scenes, the first depicting the 1919 wedding when Faulkner’s childhood sweetheart, Estelle Oldham, married another man. Local actor Damon Burks was cast in the film as Oldham’s father, Lemuel Oldham, and was part of the wedding party on the church steps. The crew took multiple takes as actors portraying Oldham and her first husband, Cornell Frankin, walked down the church steps as the wedding party congratulated them.

After the crew left the church, time moves ahead in Faulkner’s life to 1937. The second scene was shot in the dining room at Gil and Jerri Anne Davis’ Lee House on McLarty Street. By this time Faulkner, who is played by Eric Roberts in the documentary, had been married to Oldham for a decade, a marriage that came just two months after her first wedding ended with a divorce.

The scene is set in Faulkner’s rented house in the Pacific Palisades in California as an unusual guest is invited to dine with Faulkner and his wife. Faulkner’s mistress is invited for supper, an outing that ultimately ends with outrage, a reenactment that was captured by the film crew that took much of the day Tuesday.