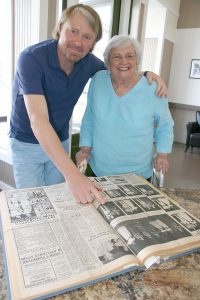 Lars Meyn, a native of Germany, (left) forged a lifelong partnership with the Taylor family including Julia Taylor (right) after living with them for almost a year as part a Rotary Exchange program. The two reminisced about his year attending Water Valley High School during his visit to the U.S. last month.

WATER VALLEY – Lars Meyn grew up in Germany and has lived in the United Arab Emigrants for the last 14 years, but Water Valley is his second home. He spent a year here, attending Water Valley High School during the 1984-85 school year as one of 30 German students selected to represent his home country in the U.S. as part of a Rotary Exchange Program.

“I was one of the lucky guys,” Meyn recalls about that journey 35 years ago that ultimately changed the course of his life. “Because afterwards, I had the power and knowledge on how to go to another culture,” he explained, a reference to a life-changing decision he made to move from Germany to the Dubai to launch a business 14 years ago.

But that is jumping ahead in this story that starts in July, 1984, when Meyn first arrived in the U.S. He was 17 years old and had eight years of English in school back home. After spending several days in New York City learning about the culture in the U.S., he was assigned to a host family in Water Valley.

“I was actually applying for California,” Meyn recalled during a short visit to Water Valley last month, his fourth return trip since he left in 1985. “Then I got a letter saying Mississippi. I thought Tom Sawyer, Huckleberry Finn.”

He briefly researched the state, learning about Mississippi and southern culture at a library before boarding the plane from New York City to Memphis. During the next 12 months he learned to drive, played on the football team, made lifelong friends and earned a diploma. But it didn’t end there, the connections were life-long as he gained a new family and life experiences that helped him launch a medical insurance consultant business, first in Germany before moving to Dubai to start over in a new culture.

Brother Leland Hurt from the First Baptist Church was his contact person, picking him up at the airport in Memphis when his plane landed. He also stayed with Brother Leland briefly when his first host family didn’t work out.

Back home Meyn played soccer and after demonstrating his kicking ability, he secured a spot on the Blue Devil team for kickoffs, extra points and field goals. It was on a Friday night when he was on the field during a rivalry game against Coffeeville when his new forever host family emerged.

“We just overheard a conversation, Brother Leland mentioned that number 34 was looking for a new host family,” Julia Taylor recalled.

Number 34 was Meyn’s number, and Julia and Bennie Cole Taylor decided that night they would offer to host Meyn.

“The next day we called Brother Leland and asked if Lars would like to come live with us,” Julia said. As it turned out, Julia’s sister and her husband overheard the same conversation and also offered to host Meyn.

So Meyn got to choose, a home with no children living there or one that had children.

“The choice was just perfect, it couldn’t have been better,” Meyn explained as he went to live with the Julia and Bennie Cole Taylor. It was the house with no children, as their son, Bill Taylor, was already in college.

He described the experience as very different from his hometown in Hamberg, Germany.

“My first (host) family went to a Baptist Church, so I was a Baptist for that year. I was part of this Baptist family,” Meyn continued, as he recalled weekly meetings before school and Sunday services.

He also fondly remembers fellowship after church, which included trips to lake for barbecuing as well as get-togethers at the Taylors’ residence.

“I appreciated your country, your community, everybody took care of everybody,” Meyn added. “It was amazing to me, something I had never seen before. All of these things made that year very rich for me.”

The bond Meyn forged with his new family also extended to his parents, as they made several trips to the U.S. to vacation with the Taylors. The Taylors also traveled to Europe as they became lifelong friends. His sister even came to visit the Taylors for two months. And there was that summer in 1986 when Bill Taylor and Meyn spent a month traveling in Europe, but details on that outing are scarce.

A Foundation For The Future

Meyn finished his last year of school in Germany when he returned in 1985.

“I took English as my main class, because it was easy,” he added.  Next he opened his business and has been self-employed since he was 24.  He traveled to Dubai during a holiday in 2002 and liked the area even though that was before the big boom.

“I thought something would happen there and I could provide my service, consulting corporate clients in the Middle East.

“I just told Julia and Ben that my life has been determined by the fact that I was here for that year. Because afterwards I had the power and the knowledge on how to go to another culture,” Meyn explained.