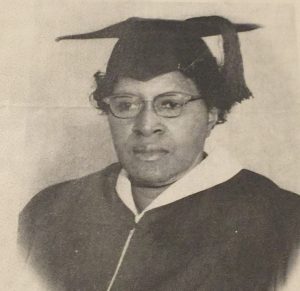 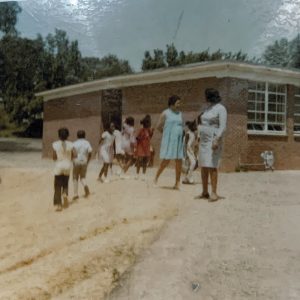 Mrs. Daliah McLeod and Mrs. Dollie Ann Henderson on the playground at Davidson Elementary during the time of Mrs. Kelly’s tenure.

My angel editor questions why I still insist on using Mr. and Mrs. when I refer to my elders. I cannot avoid it in this instance because the most special thing that I remember about Mrs. Lucy Kelly was we all called her “Mrs. Lucy Kelly.”

As a beloved teacher in the Davidson School System, she demanded our respect and honor.  As with the majority of the outstanding women that we have featured, I was delighted to learn more about her and respect her even more because of this new information.

Lucy Martin Kelly was born November 18, 1900 in Bryant, Miss. to Barney and Hannah Martin.  She joined Pleasant Grove Missionary Baptist Church in Coffeeville when she was 19. The pastor at that time was Dr. C. P. Bohannon, who founded the Mt. Moriah Missionary Baptist Association in 1908.  On January 19, 1935 she married Jonah L. Kelly and became a step mom to his six children. Lucy and her husband were farmers and both taught Sunday School. Her great nieces, Maxine and Clementine Booker, lived with the Kellys. After a while Maxine joined her mother out of state, but Clementine stayed with them until she graduated from high school.

Lucy completed her elementary and high school requirements in what appears to be several installments – indicative of the limited educational opportunity for blacks in Mississippi at the time. Records show that she completed her early education at a Coffeeville Extension Center between 1941 and 1944. She was accepted in good standing by certificate to Rust High School in Holly Springs in September 1944 with elementary education to be her major.  Records show that she also submitted her information to Mississippi Industrial College in Holly Springs, which is no longer in operation. Lucy received her Bachelor of Science degree in Elementary Education from Rust College on June 2, 1958.

Mrs. Lucy spent the majority her teaching career in the all black Davidson School System.  The Kellys were neighbors of the Orice and Beatrice Sims family. According to their son, Lee Russell Sims, she also taught his father, Orice Sims, in a one room log cabin. Lee Russell remembers being in her fourth grade class.  “She often left me in charge of the class when she had to step out or during end-of-the-year   testing,” he said.  He laughingly recalls she had a big paddle and loved fried chicken.  Mr. Kelly, he added, was like a granddad to him and his 13 siblings and always watched out for them.

Mrs. Lucy was a decades-long member of Mt. Grove M. B. Church, remaining a congregant until her death on November 15, 1986, three days before her 86th birthday.  Reverend Jacob Charles Hentz remembered her as “a fine lady and a dedicated servant of God. She worked tirelessly and supported many ministries while teaching in the public school and in the church.” She served as president of the Missionary Society and as the educational director.  Mrs. Lucy served as the vice president of the Missionary Society for the Mt. Moriah District and was a past matron of Heroines of Jericho Court 160.

Mrs. Lucy Kelly also taught me in fourth grade, and I can still see us standing in line in front of the blackboard for the spelling quizzes.  I was terrified of missing a word and terrified of her.  But she did have a gentleness about her, and I came to understand that Mrs. Kelly was more smoke than fire.   She loved us and wanted us to be successful, and we did not want to disappoint her. Like with most of my teachers, I did not care for moving on to the next grade after getting accustomed to one teacher, and this was especially true with Mrs. Kelly.

As I have said many times before, we had some awesome educators at Davidson.  Just meeting the state requirements probably presented a challenge to all of them. Mrs. Lucy Kelly was one who garnered such respect that most of us still call her by her full name, not due to her age but out of sincere gratitude and admiration.  She overcame obstacles and barriers to simply obtain an education, and because she shared that knowledge, we are better for it. There is indeed something special about being known by your full name.  We remember her!

The six students from the Oral History graduate class at the University of Mississippi have completed the first series of interviews designed to document black community history in North Mississippi. These students are pursuing masters degrees in southern studies, an interdisciplinary program that investigates the complexity of the American South.

The students report having had extraordinary experiences while learning about Yalobusha County and the lives of its black citizens. The students are now getting ready to present their interviews, a part of their final class requirements. These presentations will take place on the afternoon of December 7th in Water Valley and will be open to the families of those interviewed and the general public. The location will be announced after final arrangements are made.  This informative and educational program provides a great opportunity for younger generations to learn more of the black history of their community.

We are still soliciting individuals to participate in the interview process.  We hope that the collaboration between this column and the University of Mississippi history department will continue beyond this semester. Consider this an invitation to support this project and mark your calendar to join us December 7th for the Oral History Event.  Stay tuned for the time and location!