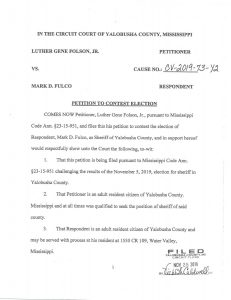 WATER VALLEY – The sheriff’s race has landed in court after Democratic candidate Luther Gene Folson, Jr. filed a petition Monday to contest the election. The petition comes after independent candidate Mark Fulco was certified the winner of the Nov. 5 election with a two-vote victory over Folson, 2,569 to 2,567.

Folson had 20 days from the date of the election to contest the election and filed in Yalobusha County Circuit Court Monday afternoon, less than an hour before the deadline expired.  Circuit Clerk Daryl Burney reported the petition has been forwarded to the Mississippi Supreme Court. Under state law, the Chief Justice or another judge of the Supreme Court shall designate a judge to hear the petition. The judge – either a circuit judge or retired judge on senior status – will be appointed from a court district outside of the county. The proceeding should be set at the earliest possible date, according to the statute.

Folson alleges that he received a majority of the legal votes cast during the election and he was deprived of his election, citing widespread irregularities and wrongdoing in the handling, approving and counting of the absentee ballots by the Yalobusha County Election Commissioners and the election workers employed by the election commissioners.

Folson’s petition cites problems with four absentee ballots, two in the Beat One North precinct and two in the Beat Four Oakland precinct, along with the improper use of printed unofficial copies of the official ballot that were used during the election.

Folson’s petition claims both votes were counted, allowing the voter to vote twice in the election.

The second problem in Beat One North cited in the petition was another absentee ballot that did not contain the voter’s signature as required by law.

As a result, the petition states that the two illegally cast absentee ballots were commingled with other ballots and “tainted all absentee ballots cast in the Beat 1 North Precinct during said election.”

Folson requests that the court void or invalidate all absentee ballots cast in this precinct and order the total votes from the election to be determined without considering or counting these absentee votes .

Folson’s petition also states that the application for the absentee votes of two people in the Beat 4 Oakland precinct did not have signatures as required by state law. The absentee ballots were approved to be opened and counted, instead of being marked rejected for the lack of signatures.

Folson’s petition states that the circuit clerk’s office printed unofficial copies of the official ballot and allowed them to be used throughout the county.

“These ballots are strictly prohibited by law,” according to the petition. “The court should find the use of said ballots were violative of state law and void each and every ballot that constitutes a copy of the official ballot.”

Burney provided insight on the copies of the ballots used in his office, telling the Herald that on the morning of Saturday, October 26, his office printed four copies for absentee voting after running short on ballots.

“It was important that the voters were able to cast a ballot, which is why we made copies of an unvoted master ballot,” Burney explained. The circuit clerk also said he contacted the Secretary of State’s office Tuesday morning and confirmed his office is allowed to print copies of ballots for absentee voting.

In closing, Folson requests that a judge be appointed to preside over this matter and that a jury be empaneled in Yalobusha County at the earlier possible date to review the matter, count the legally cast ballots to determine which candidate received the greatest number of legal votes cast and enter a verdict for said candidate, or grant any other or further relief the Court deems just and proper. Folson is represented by Greenville attorney Willie Griffin of Bailey & Griffin, P.A.