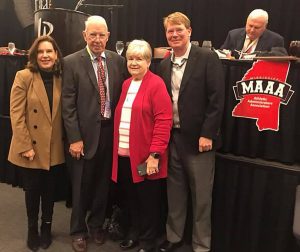 Robert Turnage is pictured with his family last Thursday in Biloxi as he was inducted into the Mississippi Athletic Administrators Hall of Fame. The group includes his daughter, Courtney Turnage Walker (left); his son, Bryce Turnage (right);and his wife, Mary John Turnage.

Turnage spent 38 years in public education, the last seven as superintendent of Philadelphia Public School District. Coach Turnage began his career in education in Utica in 1964, where he coached junior high athletics and high school football. He also taught social studies and biology.

After two years at Utica, he moved on to Wingfield High School in Jackson, then on to Meridian High School where he spent the next 28 years. Turnage served as an assistant coach, head coach, assistant principal and principal. From 1973 to 1987, his responsibilities also included serving as the athletic director (AD) for the Meridian Public Schools District.

A graduate of Water Valley High School, Turnage received his A.A. degree from Northwest Community College, B.S. degree from the University of Mississippi and Specialist degree from Livingston University.

“I was really surprised,” Turnage said when he first got the call back in October that he would be inducted into the MAAA Hall of Fame, explaining that it had been years since he had worked in athletics. He retired in 2002, but it had been 31 years since he served as AD.

But the years at Meridian were good ones, first as a coach when the football team racked up some impressive seasons, and later as AD. Turnage recalled that sports opportunities for females were limited, track and basketball.

“We added a good many sports to the program and we had some good years,” he told the Herald.

Bob Tyler, another longtime coach, shared unique insight into Turnage’s gridiron days. The pair forged a lifelong friendship that started when Tyler was head coach at Water Valley High School and Turnage was a sophomore player.

Turnage said his sophomore year was a tough one.

“I was not a really good player, but we worked at it,” he explained.

He also recalled advice from Tyler, telling him things would fall into place because he was putting the time in.

“He probably worked as hard as any player I ever had for 32 years,” Tyler added.

Turnage was able to start his senior year for Tyler. He was also able to coach with Tyler years later at Meridian.

Turnage explained he was coaching at Wingfield when he got the call to interview.

“It was coach (Bob) Tyler, he said they had an opening for a line coach,” Turnage said.

That was in 1967 and Turnage took the job working under Tyler, who was head coach.

“We were undefeated that year,” Turnage continued, adding that the record included one tie game. Meridian competed against Biloxi for the Big 8 Championship and won.

“It was one of those games where we could not do anything wrong,” Turnage added.

That would be Tyler’s last year at Meridian.

The next year, 1968, Turnage said Meridian won the north half championship and faced Biloxi again.

“We got beat 28-23, we had one touchdown that was called back, but the call was right,” he noted.

“He was one of those natural leaders,” Tyler said about his friend’s career. Last year, Turnage moved back home with his wife, Mary John.

“We are very fortunate to have Robert and Mary John back in our community,” Tyler said. “They are both champions and are valuable participants in the community and their church.”