WATER VALLEY – Judge Jeff Weill, Sr. ordered a new election in the Yalobusha County sheriff’s race in a ruling Tuesday morning, but stipulated that the election will only be held in two of the county’s 12 precincts after declaring an accurate vote count could not be determined in the Beat 1 North precinct and the Beat 4 Oakland precinct.

The ruling followed a day of testimony in Yalobusha County Circuit Court Monday in an election contest hearing scheduled after Democratic candidate Luther Folson, Jr. challenged the outcome of the Nov. 5 General Election. Independent candidate Mark Fulco was certified the winner of the race with a slim, two-vote victory, 2,569 to 2,567 votes.

Much of the testimony Monday focused on four absentee ballots that were deemed invalid, two in Beat One North and two in Beat Four Oakland. Three of the absentee votes were not signed properly, either on the envelope containing the ballot or on the application to request the ballot. The fourth ballot was invalid because the voter also cast a regular ballot on election day. All four absentee ballots should have been rejected by poll workers at the precincts.

During Monday’s trial, Judge Weill had the absentee ballots counted in both precincts. Of the 82 absentee ballots in Beat 1 North, Fulco received 51 votes and Folson received 28 votes. There were two ballots that had no vote in the sheriff’s race and another that had a write-in candidate.  In Beat 4 Oakland, 17 of the absentee votes were counted for Folson and 12 for Fulco.

Folson’s attorney, Willie Griffin, argued that all of the absentee ballots from both precincts should be discarded, a total of 101 votes, and the winner declared from all other ballots cast in the election, which would have made his client the winner.

Fulco’s attorney, Kent Smith, argued that two votes should be subtracted from his client’s tally in Beat 1 North and all of the absentee ballots should be discarded from Beat 4 Oakland, a revised vote count that would make Fulco the winner.

Weill noted that both parties suggested different solutions on how to handle the absentee ballots from the two precincts.

“Mr. Folson urges the court to invalidate all absentee ballots in those two precincts as a result. Then after doing so, recalculating all the votes county-wide without any of the absentee ballots in those two precincts included, effectively declaring Mr. Folson the winner. This the court will not do,” Weill said as he read his ruling in court Tuesday morning.

Weill added that it would be unfair to the 101 absentee voters for their votes to be discarded.

“In Beat One North, to throw out all of those votes would totally disenfranchise those voters. This method would also disenfranchise the 29 absentee voters in Beat 4 Oakland. This would not only be unfair to those voters, but would generate a lack of public confidence, if not distrust, in our election process in Yalobusha County,” Weill continued.

“Mr. Fulco urges the court to imply one of two remedies to the problems on these ballots. The first option is to simply deduct two votes from his total in Beat 1 North, while not employing the same method in Beat 4 Oakland and allowing the other absentee ballots to be counted in Beat 1 North,” Weill explained.

“This is not supported by the law,” Weill said, citing case law.

“His second option is to employ a rule from a 1948 Arizona case, referred to the rule of proportional deductions which employs a mathematical calculation to deduct absentee ballots in direct proportion to ratio the candidate received in each entire precinct,” Weill said about a second option proposed by Fulco’s attorney.

Weill also rejected this suggestion and declared that a new election will be held in the Beat One North and Beat Four Oakland precincts.

The ruling means the current vote count in 10 of the county’s 12 precinct  from the Nov. 5 General Election will stand. Judge Weill also ordered that a ballot in Beat 5 Coffeeville be added to Fulco’s count after attorneys for both candidates agreed the vote, which had an x for Fulco rather than the oval box shaded, was legitimate.

The certified vote count from the 10 precincts, plus the ballot counted from Beat 5 Coffeeville, will give Fulco a 39 vote lead before the new election is held in the two precincts – 1,878 votes to 1,839 votes.

“Two very nice and very qualified gentlemen fought  vigorously to win this election in a very honorable way. There wasn’t a whiff of fraud of intentional wrongdoing alleged or suggested in this election contest and that is a tribute to residents of Yalobusha County and their elected and appointed officials. Unfortunately only one candidate can prevail and that candidate is required to be the clear choice of the voters chosen in a fair and transparent election,” Judge Weill said in comments Tuesday.

Circuit Clerk Daryl Burney told the Herald that the final written order from Judge Weill will be sent to his office within 14 days, which may provide clarity on when the new election will be scheduled and if the seat will be vacated until the election.

Weill was appointed by the Mississippi Supreme Court to hear the case. 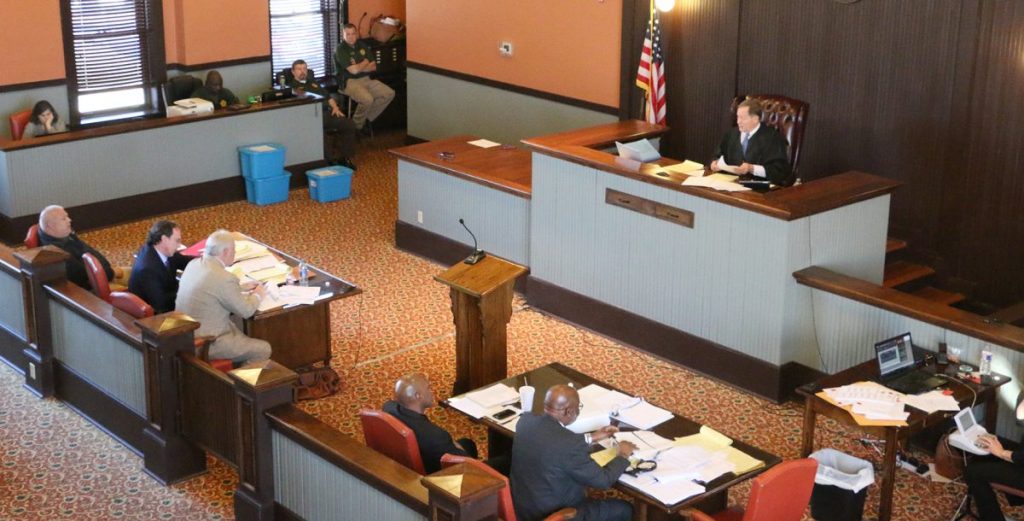 Judge Jeff Weill presided over the hearing that included a day of testimony Monday and ruling Tuesday.