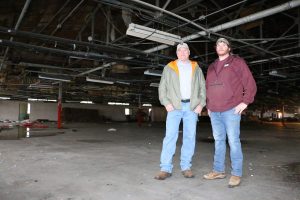 Hill’s Construction, LLC, was selected as the general contractor for the work to transform the Central Street building into the state’s first rural education and innovation hub. Steve Hill and Steven Hill reported the work will move fast to meet a tight timeline to complete the project. Steve Hill also reported the project is special for his company, as his grandfather worked on the construction of the building after World War II, and because it is in his hometown.

WATER VALLEY – A long-abandoned industrial building that was an economic hub and the heart beat of Water Valley for decades will be resurrected as a tech center hub. A groundbreaking was held last Thursday, marking a $4.7 million investment that will transform the former Rice-Stix/Big Yank building into Everest in the coming months.

“Everest is this building, but Everest is also a concept. Everest is Mississippi’s first rural education and innovation hub,” Base Camp Coding Academy co-founder Glen Evans explained to a crowd of almost 100 attending the ceremony on a rainy morning.

“Imagine the benefit of a perspective employer being across the hall from their future employees, being able to guide and direct their training,” the Base Camp co-founder added.

Everest will also house an incubator for start-up businesses.

“After all that we will still have about 30,000 square feet. We think we can get other people to come in and co-locate with us. It is really an economic development story,” Evans said.

His comments followed an opening prayer by Binnie Turnage, who first recalled the original construction of the 64,000 square feet Central Street building that employed almost 500 people.

“For years this was the livelihood and a source of income for many, many families. Here lately it has been dead in the water. It’s exciting to be here to see the resurrection of this old place,” Turnage noted before his prayer for blessings for the workers during the construction.

The ceremony included gratitude for a lengthy list of supporters who helped make the project a reality, including founding sponsors Diane and Dickie Scruggs, Jan and Lawrence Farrington, the John N. Palmer Foundation, the C Spire Foundation, Renasant Bank, CoreLogic, Glen and Paige Evans and FedEx.

“That group, with Northwest as our founding partner, were the ones who said yes. The ones that believed in it when it was a crazy idea,” Evans added.

Next Evans credited the City of Water Valley, for selling the building to Base Camp and helping make the project a reality, as Mayor Donald Gray took the podium.

Gray cited the project as a huge stride for the city – both for renovating an eyesore in Water Valley and the economic benefit to the area.

“I just want to thank Kagan, I can’t imagine the hours they have put in on this project,” the mayor said about Base Camp co-founder, Kagan Coughlin and Base Camp board members.

“The future they will bring to our city is just unimaginable, as brother Binnie said, it is almost like a resurrection,” Gray continued. 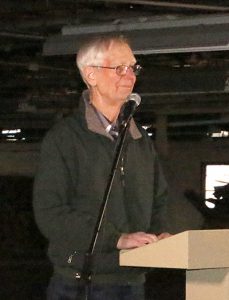 “They reached out to us. They have helped us financially, having their brand, they are helping us with credits for our students. You can’t say enough about them as a founding partner,” Evans said before inviting Dr. Matthew Domas to speak.

“I can’t say how proud we are to be part of this groundbreaking for Everest, it is an amazing building and I see so much potential when I walk in,” Domas,  who serves as vice-president of administration at NWCC, said.

Domas expressed gratitude to the Yalobusha County Board of Supervisors, who pledged $18,000 annually to pay the utility bills for NWCC at the building.

“We are in the process in thinking these things out, we have a little bit of time. The opportunity is gigantic for us,” Domas added.

The agenda then transitioned from one of Base Camp’s first partners to Facebook, a brand new supporter.

“They are our new sponsor, we have just gotten to know them over the last few months. We are obviously encouraged a global company of that size and scale has taken notice of what is going on here,” Evans noted. 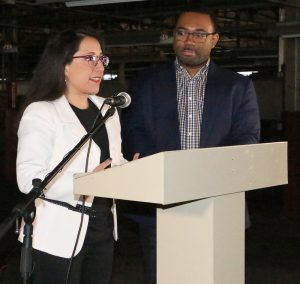 Zuraya Tapia-Hadley and Chris Randle announced that Facebook will fund scholarships for six students attending Base Camp during the next two years. They work with Facebook’s Federal Government Affairs team.

“The incredible, passion, work and devotion of Kagan and Glen and the entire Base Camp team, and the quality of your programming, your curriculum, your students and your alumni, is such that the fame has made its way to the halls of Congress. It was through U.S. policy makers that we first heard about Base Camp and really wanted to find out more,” Tapia-Hadley told the crowd.

She also said her company is devoted to promoting educational programming.

“After meeting your team here, we could not be more thrilled to find a way to partner, and find a way to help us achieve our mission of allowing people to have the power to build a community together,” she continued.

She announced that Facebook would contribute six scholarships over the next two years for Base Camp students.

Coughlin closed the ceremony with a lengthy list of acknowledgments that started with his wife along with Base Camp alumni, staff and board members.

“Glen mentioned how critical every single person has been to this. This is a house of cards that we started building, and if any single piece had fallen, the whole thing would have come crashing down,” Coughlin emphasized.

“This is the starting point. Starting tomorrow, we hand this over to the folks that are actually going to change this building and get it ready,” Coughlin continued. “Those folks  have been working for, in many cases, eight to 10 months to get us to this point.”

“They have been so patient as we have navigated the tremendous amount of oversight. The financial aspects of this program are incredibly complicated. We have so many eyes and ears watching what is going on here,” Coughlin explained.

Next Coughlin thanked the architects, William  Mills and David Jones.

“They have been working with us since the spring of last year. We are hoping to pay them for the first time tomorrow,” Coughlin noted, explaining that funding would not flow for the project until the closing last  Friday.