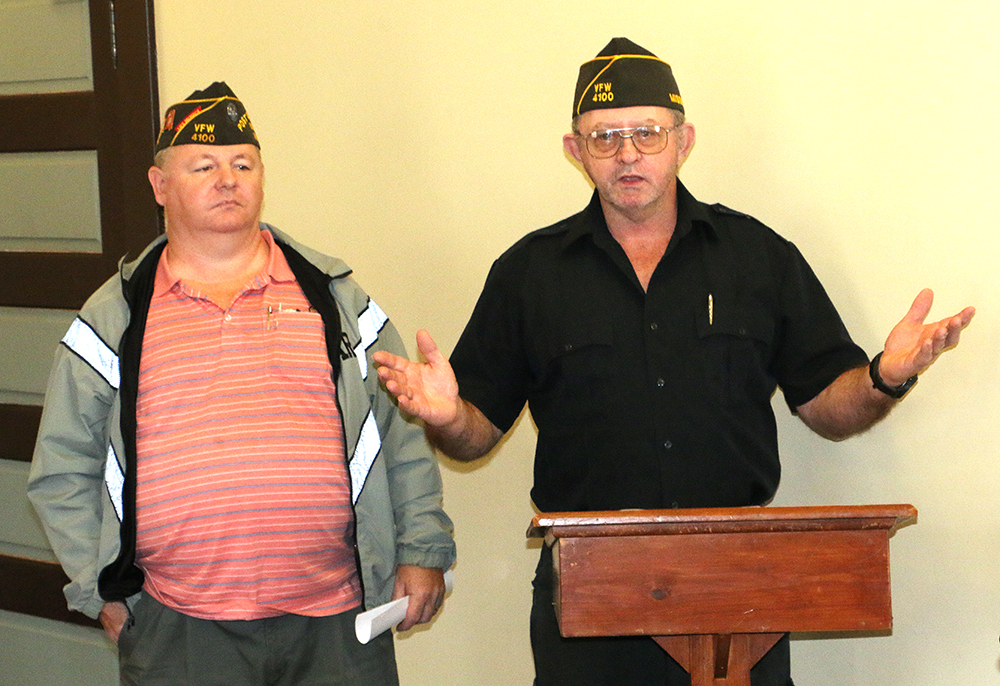 VFW Post 4100 officials Mickell Dunn (left) and Wayne Sprouse requested the Board of Supervisors grant an exemption from the smoking ordinance during Monday’s meeting.

WATER VALLEY – The VFW Post 4100 will be granted an exemption from the county ordinance prohibiting smoking in all places of public accommodation  following a 4-1 vote by supervisors during Monday’s meeting.

The vote followed a request from VFW members Mickell Dunn and Wayne Sprouse and marked the third plea for the smoking ban to not be imposed on the local VFW post.

The first request came in June, 2017, during a hearing a month before the ordinance was adopted when Dunn initially approached supervisors. Dunn explained it would ultimately shut down bingo, the VFW’s main source of income.

Dunn made a second plea to supervisors in February, 2018, explaining that the post had experienced a $13,000 loss in revenue during the second half of 2017 after the ordinance was adopted. His request was rejected with a 3-2 vote by supervisors.

“We are representing VFW Post 4100 and we are respectfully requesting an exemption from the smoking ordinance. We have been here before and you know what it does to us financially and how much money it is costing us,” Sprouse explained at Monday’s meeting in the Water Valley courthouse.

Sprouse added that the post spent a lot of money installing smoke filters in the ceiling of the post before the ordinance was adopted.

“Grenada has them, they filter the air,” Sprouse said about the neighboring VFW post, also noting the post was exempt from a similar ordinance.

“We are required to have three, we put in four, back a long time ago,” Sprouse continued. He also said smoking had been allowed in half the building, and people in the other portion of the building could not smell the smoke with the filters running.

“Based on the figures I brought last time, about $54,000 a year in net assets,” Dunn answered.

“They are taking those funds to Grenada or other places,” Sprouse added, referring to bingo players driving to other posts that do not prohibit smoking. “We are trying to get this money back in this county. We have locals driving to Grenada spending their money down there instead of here.”

“They have the same smoke eaters,” Sprouse answered, adding that Hernando also has similar set-up.

“Y’all know how I stand on it because of the last time and my stance hasn’t changed,” Gray noted. “These men have served our country and preserved our freedom, but yet we are trying to curb some of their freedoms in their own VFW post,” he continued, before adding that he is not a smoker.

“I am not either,” Sprouse said. “I came back from Desert Storm allergic to alcohol. I can’t even drink.”

“A lot of other things I don’t do either, but I went over and fought and spilled my blood on foreign soil to protect other people’s rights to have that freedom,” Dunn added.

Board President Cayce Washington, one of three supervisors serving during  the previous term who voted against granting the exemption in 2018, explained that he would not change his position.

“I struggle with it, I have talked to a number of people,” Washington said, adding that people from the VFW on both sides of the issue have talked to him about the ordinance.

“But if it is the will of this board, if there is enough votes to support it, I will support it. But personally I can’t get behind it because I know the health hazards it causes to so many people,  both to those who smoke and those who are non-smokers,” he continued.

“If y’all are here, I am sure the majority do want this?” Gray asked about the request.

“Oh yeah, that is why they told us to be here,” Sprouse answered.

“I don’t go to the VFW, but I know you don’t have kids there anytime?” District 3 Supervisor Kenny Harmon asked.

“On Friday nights, the minimum age is 12,” Dunn answered.  Sprouse added that the VFW would keep the ban in place on Friday nights for bingo and allow smoking on Saturday nights during the weekly dance.

“Even if we get the exemption from the board, we are still not going to smoke on bingo night. Just because the number of people that are there on Friday nights… I don’t know if any of y’all ever rode on an airplane back in the day. When one person lit up on the plane, everybody lit up. It is kind of like that in a room, so even if we get the exemption, we are not going to change on Fridays,” Dunn stressed.

“We are going to keep that ban in place on Friday nights,” Sprouse reiterated.

“Because we are letting the younger ones in on Friday night. Because there are so many people too. And we have workers there who don’t smoke on Friday nights… But we would like to be able to do that ourselves,” Dunn noted.

“I believe y’all are more than capable of policing your post out there,” Gray said.

Following the vote, Board Attorney John Crow explained the exemption will not take effect for at least 30 days, as the ordinance will have to be amended and published in the newspaper. 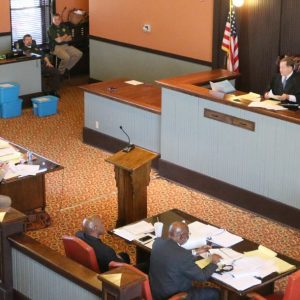