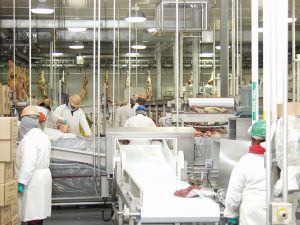 One reason cited for financial problems for the Oakland Yalobusha Natural Gas District is the demand for natural gas is less than initially expected when the gas line served Mississippi Beef Processors, LLC, in Oakland. The beef plant (above) only operated for four months before closing. While the failed plant was a black eye for the state, the site became the location for Windsor Foods and later Ajinomoto Foods, which has grown to the county’s second largest employer. There have been five expansions since the plant reopened in 2007, with millions of dollars invested by Ajinomoto to increase production. The latest expansion was announced in January and is expected to push the job tally to 450. – File photo by David Howell

OAKLAND – Yalobusha County supervisors have extended an offer to settle outstanding debt owed by Oakland Yalobusha Natural Gas District after learning that a U.S.D.A.-backed loan is delinquent and the gas district could be sold.

The $400,000 offer is a fourth of the $1.6 million owed to U.S.D.A., money initially allocated almost two decades ago to construct the gas line that extends 11 miles from Coffeeville to Oakland along County Road 211 and also serves a portion of western Yalobusha County including Ajinomoto Foods. The money was loaned to the district with a pair of USDA loans – one for $1.2 million and a second, smaller $565,000 loan.

The county offer follows months of discussion that culminated with an unanimous vote during a May 11 meeting for Yalobusha Board of Supervisors Attorney Shannon Crow to draft a letter proposing an offer that includes $300,000 from the county and $100,000 from gas district funds as a settlement payment if USDA will forgive the remaining balance on the $1.6 million debt that has long been in arrears.

If the offer is accepted, county officials noted that the $300,000 will come from an existing industrial fund account that currently has $630,000, an account that is funded from selling water to Ajinomoto Foods from the county-operated water system that serves the industry. The deal also includes the gas district repaying the $300,000 to the county over an extended period.

The county’s offer comes almost two decades after the funding for the gas district was part of a $55 million project to build a beef processing plant in Oakland. Although the beef plant only operated for four months in late 2004, the 140,000 square-foot facility in Oakland was ultimately purchased in 2007 by Windsor Foods, a frozen food manufacturer. Windsor’s initial $20 million investment was followed by five major expansions as the company was purchased by Ajinomoto Foods in 2014 and has grown to the county’s second largest employer.

The latest expansion was in January after Ajinomoto announced a $27.3 million corporate investment that will increase capacity on a rice line and boost the number of employees to 450, making the company the county’s second largest employer.

But the problem that has plagued the gas district for at least a decade is that gas usage has been lower than initially anticipated to serve a beef processing plant. Oakland Mayor Riley Swearengen first approached supervisors in 2009, explaining that the gas district was in arrears with one of two U.S.D.A. loans that financed the construction. Swearengen, who  serves as the chairman of the district, reported that the gas district did not have the gas usage originally anticipated when the beef plant was operating and the number of residential customers on the line was also lower than initially expected.

“Basically we will buy out the loan,” Board President Cayce Washington explained during discussion that has included scrutiny on the district’s cash flow. Supervisors noted that the gas district currently pays $68,000 annually on the U.S.D.A. loans – an amount that is far less that the actual payment but enough to repay the county’s loan if the offer is accepted on the district that is appraised at $678,000.

“You can’t let somebody come in there and buy it and price Ajinomoto out,” District 5 Supervisor Gaylon Gray noted about the possibility of an outside company purchasing the gas district and raising the rates.

“Are we not ultimately responsible for the Oakland Yalobusha District today because the grant has to flow through us for them to get it?” he asked about grant money that was also used for the district.

“You are just the administrator of a grant, you are not responsible. You don’t have the liability to repay that note,” Assistant Board Attorney John Crow answered during discussion on the debt.

The district sells natural gas directly to all customers on the line with the exception of Ajinomoto, who purchases gas directly from suppliers and pays the district a transfer fee.

The county has also been working on an expansion for the gas district after $300,000 was appropriated as part of a bond bill authorized by state lawmakers during the 2016 Legislative Session to extend the gas line south of Oakland to Tillatoba. Another $300,000 was allocated for the expansion from the Appalachian Regional Commission and the expansion kickoff was announced in 2018. At that time, the gas district was serving approximately 211 customers, according to a filing with the Public Service Commission.  Much of the work has been completed on the expansion, which serves customers along Hwy. 51 between Oakland and Tillatoba.