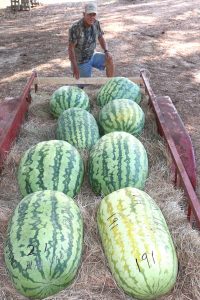 Hal Vaughn pulled eight melons that weighed a whopping 1,400 pounds. He reported the melon seeds were planted in March and then transplanted to his garden in April.

WATER VALLEY – Have you ever seen a 14-foot trailer loaded with watermelons?
Doesn’t sound spectacular unless you saw Hal Vaughn’s trailer parked on Main Street Tuesday.
With only eight melons, his load tipped the scales collectively at 1,400 and were truly a sight to behold.
“If it wasn’t for that 100-pounder – I should have not even put it on there – they would average 185 pounds each,” Vaughn explained about the biggest melons from this year’s crop he has nurtured since March. He had others in his field that would weigh in over 100 pounds, but they didn’t make the trip to town. The trailer was full.
This year marks the third season Vaughn entered the field of local growers who compete in the annual Watermelon Carnival’s largest melon contest. He swept the competition all three years but he has other aspirations. Back during the first weekend of August when the carnival is held each year, the melons are still green and growing. To break a record, the melons have to stay on the vines longer as they put on pounds each day for at least another month and maybe two.
Vaughn only pulled one of his bigger melons back in August for the annual carnival contest, a 166.7 pounder that was over 40 pounds bigger than the second place melon grown by distance cousin Jerry Vaughn.  With eight hills planted this year, he had plenty more back in his patch behind his house on County Road 436 between Water Valley and Coffeeville. He checked them regularly, taking measurements that are plugged into a tried-and-true formula to determine the weight. He could monitor how much they grew each week and determine when they stop growing. Finally he pulled the melons earlier this week, explaining that some of them had stopped growing.
“I wasn’t going to break a record with them, it was time to pull them,” Vaughn explained.
His reference to a record stems from another melon grown in Water Valley by that same distant cousin, Jerry Vaughn.
Jerry currently holds the Mississippi record for the largest melon at 239.5 pounds. Set in 2013, Jerry pulled his watermelon even later in the season, in October, and had the weight recorded on certified scales. Remember, 239.5 pounds, that is the number to beat.
At 76, Hal Vaughn is well known in the area as an all-in competitor. There were the marathons when he was in his 50s, he trained for years and competed in the Boston Marathon and others. His tomatoes are legendary, this year he planted 200 plants and sold hundreds and hundreds of pounds of delicious red tomatoes all over the county. His squirrel hunting dogs are among the best in the area, Vaughn hunts them religiously every day of the season, weather-permitting. You could not borrow enough money from Mechanics Bank to purchase some of his best ones.
That said, his aspirations for this latest venture are more than earning a blue ribbon.  Entering a first-place melon in the annual carnival contest is a goal, but like other competitors Vaughn enjoys giving the carnival crowd an experience to remember – after all, it is the Watermelon Carnival. By growing and showing this year’s crop, he also hopes to inspire other growers to get involved in the annual carnival competition as the number of competitors have dwindled in recent years.
“I want to encourage other people to grow them for the carnival (contest). I have good, quality seeds and will give them all they want. I will tell them what they need to do,” Vaughn explained  providing the seeds and expertise so others can make a showing in the 2021 carnival. Unlike Jerry Vaughn, who is a little more guarded with his advice, Vaughn will share everything he knows.
In fact, he shared his plans for next year’s crop. This fall he is going to put gin trash, phosphate and pot ash and disc it in good. Next he is going to dig four big holes, one for each of the four vines he plants next year. He is going to put his special concoction in the holes, a mixture that includes buckets of shad he will dip up at the spillway. After that, he will sprinkle a little dirt on top and cover each hole with a piece of tin.
“That will let it ferment and rot for about six months. When I get ready to plant, I will get my hand tiller and churn it up again and pull it all up in a big mound,” Vaughn added.  He admits the effort is strenuous.
“But to get good at anything, you have to work at it,” he added.
And he has a lot of melon prep work planned between now and this time next year.  Rest assured, that 239.5 pound state record, it may not hang around another seven years.