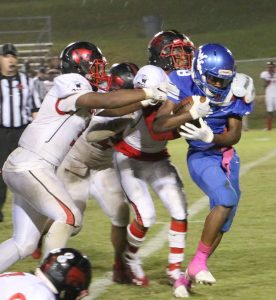 Jaden Morgan grinds out extra yards after contact in Thursday’s win over Independence. Morgan scored the final touchdown to seal the 21-12 win.

WATER VALLEY –  A strong effort by the Blue Devil defense propelled Water Valley to their second division win with a come-from-behind 21-12 victory over the Independence Wildcats at Bobby Clark Field to improve to 3-2 on the season.
With one of the slimmest crowds in the season, likely attributed to forecast rain and playing a day early, it was almost eerily quiet early in the contest as Independence (2-3, 1-1)  took an early lead on their first possession of the game followed by a second touchdown early in the second quarter.
The first Wildcat strike came after the Blue Devils went three-and-out on their opening possession. The Wildcats answered with a 66 yard drive to go ahead 6 – 0. Their second touchdown came just a minute in the second quarter on a drive that appeared to stall at their 41 yard line. Facing fourth and one, the Wildcats converted with a big run to take it to the red zone and set up the score. Two-point conversion attempts on both touchdowns were stopped and the Wildcats notched an early 12-point lead that would prove to be their final points in the game.
A 59-yard pick six by Que Carothers in the waning seconds of the half  put the Blue Devils on the scoreboard, trailing 12 – 7, following the successful PAT attempt by Jon Surrette.
The story was all the Blue Devil defensive effort in the third quarter as they mustered three consecutive stops as the offense was plagued by turnovers including a muffed point and an interception.
Facing third and 10 late in the third quarter, the Blue Devils’ first spark of offense in the half came as sophomore signal caller C.J. Telford launched a 50-yard pass to connect with Colby Lafayette in the end zone. The PAT by Surrette was good and Water Valley went ahead, 14-12, for their first lead in the game.
The Blue Devil defense forced another punt on the next possession and runs by Jaden Morgan, Carothers and Telford moved the ball into the red zone before Morgan took it to the end zone on a six-yard run to go ahead, 21 -12.
Water Valley fans were on the edge of their seats as Independence tried to get back in the game on the ensuing kickoff that was returned to the 10 yard-line. The Blue Devil defense would again withstand the red zone test as they were to stop the winded Wildcats on the four-yard line.
Following the turnover on downs, the Blue Devils finished the game with a drive that ate up the remaining five minutes on the clock. The Wildcats didn’t go away quietly as flags flew on the final two plays, both for unsportsmanlike conduct as a Wildcat defender was ejected with four seconds remaining in the contest.
“It was a weird night, but a win is a win,” Blue Devil head coach told his players in the mid-field huddle. I am proud of you, Embry continued. You are 2-0, the coach stressed about the win that allowed his team to remain perfect in division play.
They never quit, Embry added as the team exited the field.
Next week the Blue Devils travel to Holly Springs to face the Hawks.