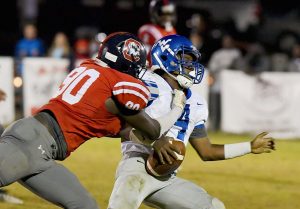 Sophomore quarterback C.J. Telford gets wrapped up for a loss of yards as the Blue Devil offense struggled to put up points in the second half in Friday’s loss against Choctaw County. – Photo by Jeff Parks

ACKERMAN – Notching four wins in a nine-game season, the 2020 Blue Devil gridiron team will be remembered as a young squad who wouldn’t quit.
The team faced adversity during much of the season – the jamboree and opening game were nixed after the entire squad was quarantined in the opening weeks of school back in August. Big plays were called back numerous times during the season as tough officiating seemed to go against the Devils more times than not. The adversity was also self-inflicted as costly mistakes and turnovers often plagued the team.
Their season ended in the first round of the playoffs last Friday night as the Choctaw County Chargers (7-3, 4-1) delivered the final blow with a 31-14 victory.  The Chargers scored on their opening drive to put the Blue Devils in a familiar position,  they also fell behind early in their final two regular season games as both Senatobia and North Panola scored on their first possessions.
The Water Valley offense battled back, scoring on a 72-yard pass from quarterback C.J. Telford to Marion Morgan to knot the score at seven. Following a second Choctaw County touchdown in the first quarter, a one-yard run by Jaden Morgan tied the game again at 14-14 early in the second quarter.
The Warriors scored another 10 points to go ahead 24-14 at the half.
The squad’s stamina showed again in the final game, as the Blue Devil defense would stand stronger in the final half of the game, battling until the final whistle as the Chargers were limited to a final touchdown in the fourth quarter to earn the victory.
The four-win season marks the toughest year since 2016 when the Blue Devils were only able to muster two wins. Two years later and with many of the same players from the 2016 roster, the Blue Devils   recorded their second state championship title in a spectacular season. 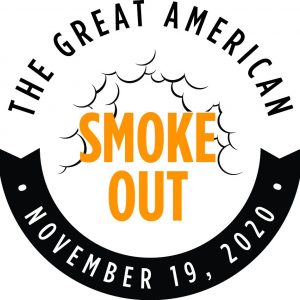