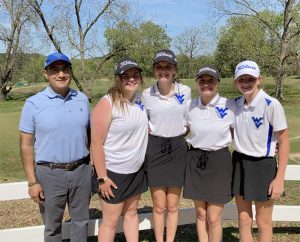 The Lady Devils Golf Team is coached by Michael Howland and include (from right) Parker Avant, Sydney Epes, Chloe Clement and Bethany Pryor.

PONTOTOC – The Water Valley girls’ golf team competed in the Class II, Region 3 District Championship at Pontotoc Country Club and placed second overall, punching their ticket to the State Tournament in Hattiesburg on April 26 and 27.

The girls shot a team score of 180, losing to rival New Albany by six strokes. The team was led by the play of Sidney Epes, whose 81 also placed second overall in the individual competition. That solid score was followed by a 99 from Parker Avant, which will allow both players to participate in the State Individual Competition, as well as the team event.

While winning the tournament is always the goal, Epes put the year into perceptive.

“The goal at the beginning of the year was to make it to state and we accomplished that,” Epes explained.

”We may have come in second (to New Albany), but we’ll beat them at state,” Avant added.

In other golf news, the Water Valley boys’ team will be playing their Class 3A, Region 2 District Tournament on April 21, at Dogwoods Golf Course in Grenada.