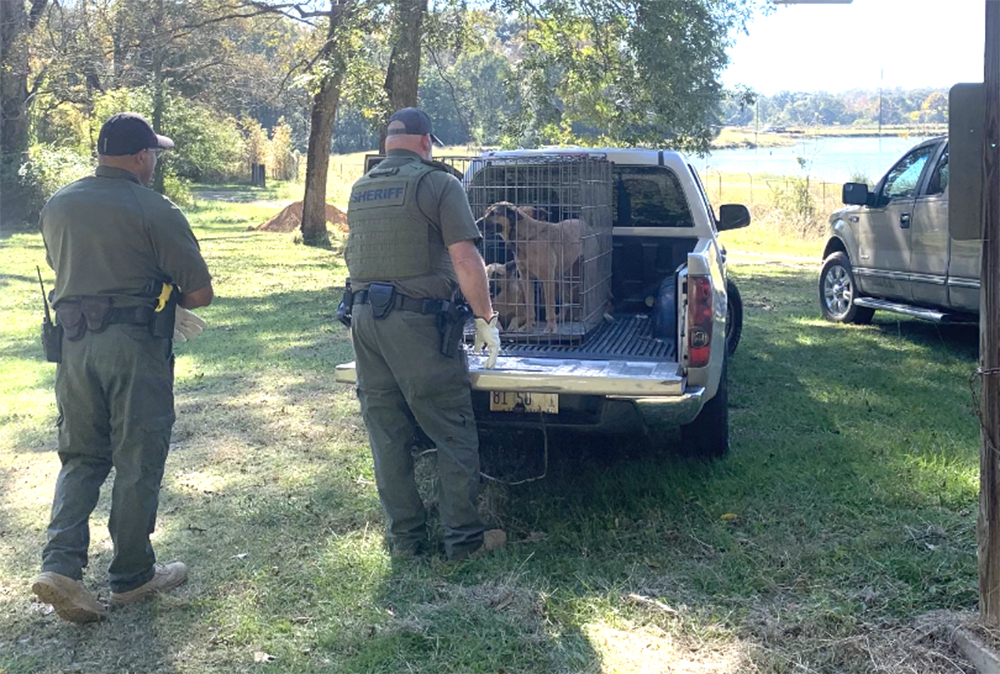 The Yalobusha County Sheriff’s Department seized five dogs on Road County Road 224. The owner of the dogs, Sam Goodwin, updated supervisors measures taken to restrain his dogs. His comments came during Monday’s Board of Supervisor meeting in Coffeeville.

COFFEEVILLE – Public scrutiny of the county’s vicious dog ordinance prompted a two-hour discussion in Monday’s recessed Board of Supervisor meeting as county officials weighed options to ensure citizens are protected. The recurring issue resurfaced last month following an incident on County Road 224 when a pack of dogs attacked and killed a dog.

The Yalobusha County Sheriff’s Department seized five of the dogs owned by Sam and Phyllis Goodwin on Nov. 19. The dogs were later released to the owners after an enclosure was constructed to contain the dogs in accordance with the county’s ordinance.

Supervisors initially met with Sam Goodwin, the owner of the vicious dogs, for an update on the issue at Monday’s meeting in the courtroom in Coffeeville. Goodwin explained that the night the dogs were placed in the pen, two of the smaller dogs were able to dig out and entered his house through the doggie door. Since then, an inner perimeter has been added using chicken wire.

“This will have to suffice until an approximate 380 linear foot pen we have contracted for will be installed. The initial waiting period was three months, but upon explaining our situation it could be prayerfully sooner,” Goodwin added. “All dogs are in compliance with their rabies vaccinations and registered with the sheriff’s department as vicious dogs. Phyllis and I would like to thank the sheriff’s department, the Board of Supervisors and other officials for their help, patience and understanding throughout this procedure of securing our dogs,” Goodwin said as a prepared statement was read aloud.

Next Goodwin questioned if his dogs must remain in the enclosed area for eternity.

“Yes sir, if they are deemed a dangerous dog. That is the interpretation of this ordinance,” District 5 Gaylon Gray answered.

“They got life?” Goodwin continued.

“They got a life sentence,” Gray confirmed.

“Nobody made that judgment,” Goodwin noted about the designation of his dogs as dangerous.

“I have talked to our board attorney to hash out some of these things. I know you had questions,” Board President Cayce Washington explained. “(Sheriff) Jerimaine (Gooch) had questions and I think this whole thing has opened up questions. Think about this for a minute, Sam, I feel for the lady who lost her dog. We are very fortunate that there wasn’t a human life lost that day, or someone mauled. Whether it could or could not have been, I don’t know,” Washington countered.

“So the public forum was a large part of my conviction, making county officials look bad?” Goodwin questioned about the sentence imposed on his dogs.

“Well how did you get that information, didn’t you get it off the public forum?” Goodwin continued, a reference to Facebook posts from neighbors in the vicinity about the deadly attack.

“They came to the board meeting several months ago,” Washington and Gray answered, referring to an earlier plea from Sandy Lott and Linda Robinson for Goodwin to restrain his dogs – plea that came before Lott’s dog was killed.

“I love to establish cordial relations with my neighbors, there is no law against that is it?” Goodwin said.

“The concern that I had was that your neighbor came to us several months ago,” Washington reiterated.

“What she stated there was correct, but we don’t have two litters of dogs a year,” Goodwin noted, explaining that some information that has been circulated about his dogs is inaccurate.

“You may be judge and jury but you are not executioner,” Goodwin added about ensuring his dogs will not be put down by the county.

Next Board Attorney Shannon Crow provided input about the situation.

“Any of the dogs that were determined to be dangerous, whether that was all of them or four or five of them, now have to live inside that fence. Or inside your house, it just has to be within a proper enclosure,” Crow advised. The lawyer also reminded Goodwin that if the dogs escape from the enclosure, Goodwin must immediately catch the dogs and put them back in the enclosure.

“I think if this is all true, you have done exactly what you are supposed to according to the ordinance,” Crow explained about the steps taken by Goodwin to comply with the ordinance.

Let me ask this, how widespread is the dog situation in Yalobusha County. How many dogs have been apprehended?” Goodwin asked.

“We get several calls all over the county,” the sheriff answered.

“The same ones?” Goodwin asked about repeat calls on the same dogs.

“Different calls because most folks, when we tell them to put them up, they put their dogs up,” Gooch explained.

Goodwin then explained that he had offered to provide BB guns to his neighbors to shoot the dogs when they get on other property.

“I don’t think there is anyone in this room who wants to have to restrain dogs. But this board has a responsibility when things bring undue problems on our neighbors,” Washington explained. “It could be a fallen tree, it could a dog crossing over on someone’s property, it could be a number of things. In this case, what makes this unique is you have a number of dogs, I heard the number 12. We don’t want to tell you how to manage your dogs. But your neighbors should not have to use a pellet rifle or any type of firearm to get dogs off their property. They deserve to live in the same peace that you deserve to live in on your property,” Washington countered. “I am like anyone else in this room, I was elected to help manage this type of problem. Your wife and I served on the school board together, she is a wonderful person. You are a good guy. But your neighbors are good people too and we have a problem that must be resolved. And it sounds like this is an ongoing issue, we have to put things on the books to protect those around you. It sounds like you are making an effort and I think this situation, in my personal opinion, this an emergency that has to be addressed right away and quick as possible.”

“Our oldest dog, Moby, she is seven. She is a peaceful dog, she doesn’t like to see them fighting among themselves. She is the mother and grandmother of all of them, if she could be release. It would be on my recognizance,” Goodwin asked before exiting the meeting.

“I think what we have before us today is to look at our existing policy and how it addresses a pack of dogs versus one or two. Do we treat them as individual cases per dog, or do we treat them as one problem for the whole pack. But we have to address it, we can’t let it keep going on if your dogs are getting out and running loose,” Washington said. “It is my understanding that some of your neighbors are scared to walk up the road. And they are entitled to walk up a public road just like anyone else.”